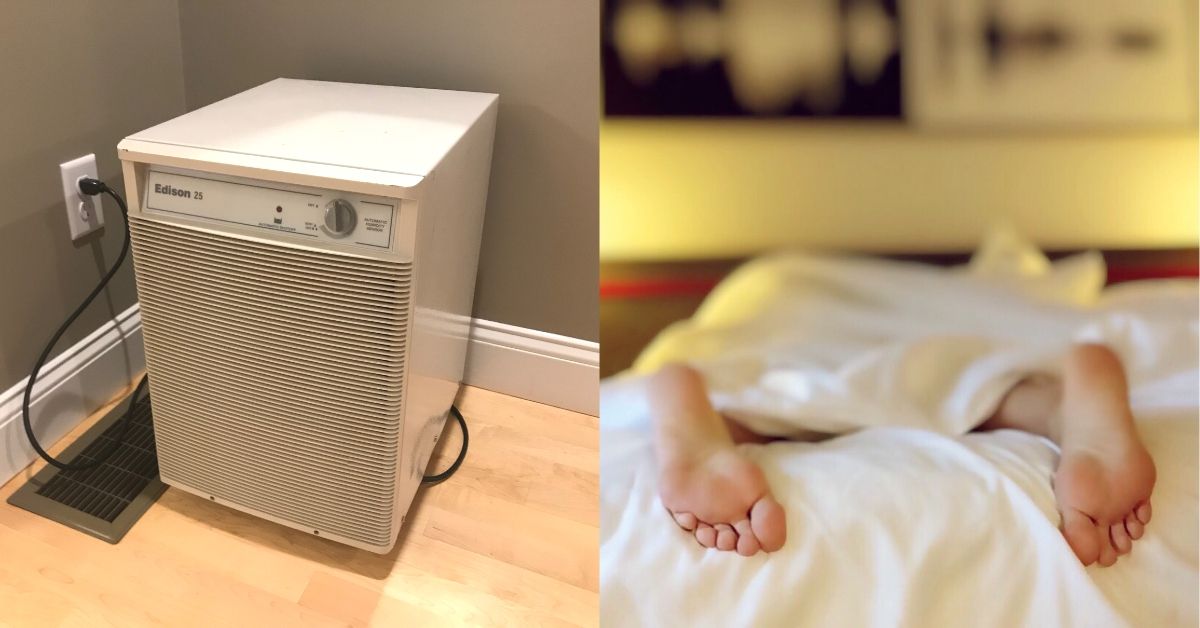 There are two extreme ends when it comes to dealing with moisture, and are both characterized by the atmosphere becoming dangerous to live in. There is the low and high at each extreme ends. High humidity creates an atmosphere which supports the thriving of numerous infection causing organisms, leaving you very exposed and almost certain to get infected. Are dehumidifiers safe to leave on? YES and NO. why? That’s what we would be discussing explicitly in this post.

High humidity is a condition where air in the atmosphere is saturated, or hold a high amount of moisture, precisely anything above a relative humidity of 60%. This comes with a normally hot weather, as well as sleeping problems, and calling forth of mold to come join the home party.

A dehumidifier is a device that is designed to counteract this effect, pulling out moisture from the air, and condensing it in a storage tank or simply channeled outwards as water. Most of the times, dehumidifiers have to work for a prolonged period of time, to affect the relative humidity of the atmosphere, and since they are electrically powered, this could become risky to leave in more ways than one. However, we can’t out rightly say that without taking other factors into account.

Read Here: The best Dehumidifiers under $100

First of all, are dehumidifiers a fire hazard? 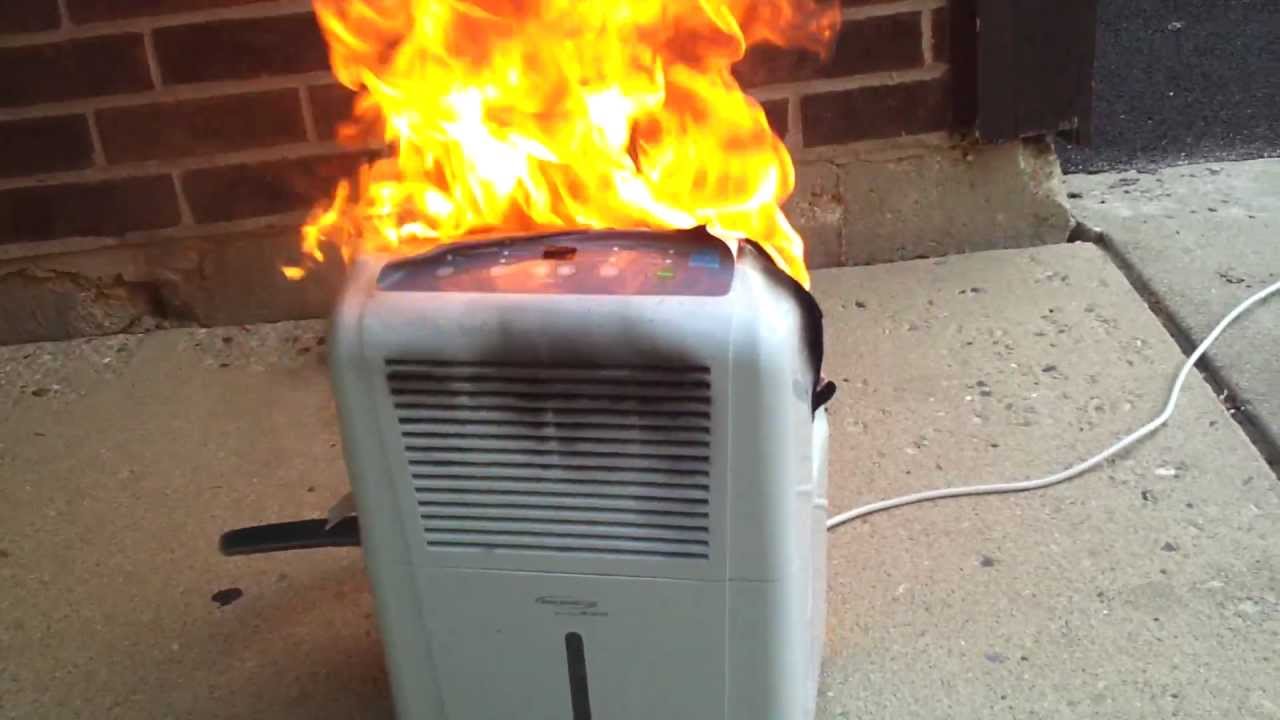 Not all dehumidifiers makes use of electricity but most dehumidifiers are electrical devices which operates by condensing the moisture in air, through use of a compressor like fridges and washing machines. As a result of this, we can’t completely rule out the fact that it poses a fire risk like many other similar appliances, however, this risk is very minimal. If all things go accordingly from the manufacturer’s end to proper use by customer, it should never cause a fire.

Fire risks associated with a dehumidifiers is mostly as a result of either manufacturer design flaws, or customer misuse. Fire resulting from manufacturers end are mostly due to design or coupling flaws like wiring and or structural mishaps.

This category of issues is however rear due to the numerous test each unit goes through before passing as safe, and if at all it happens, the manufacturers issues a recall of affected product models. Such instance has only happened once in the last few years, when Dimplex called back faulty units in the UK.

Fire could also occur when using a dehumidifier, due to poor maintenance or improper use on the customer’s end. Some acts of improper use includes placing the device to function in enclosed areas too small compared to the dehumidifier’s size.

Enclosed spaces hampers air flow required to keep the device from overheating, when otherwise is done, the resulting effect is excessive heat, which could start a fire. Placing any form of object also, especially fabric materials on the device while operating could also hinder proper air flow, resulting in overheating.

Our recommendation is to purchase a dehumidifier with the least fire risk hazard, specifically because they contain features such as the auto defrost. This stops the dehumidifier from operating when the temperature of the compressor gets too cold. If the unit keeps running with frozen coils, it wouldn’t extract moisture while keep trying to overwork itself, leading to overheat.

Should a dehumidifier run constantly?

Are dehumidifiers safe to leave on? Running a dehumidifier constantly naturally comes with the risk of overheating, which could cause a fire. However, this most likely to happen when the device lacks an auto defrost feature, and is ran under unhealthy maintenance conditions.

Our recommendation on this is that a dehumidifier should run proportionally to the high moisture level in the air. This means that the dehumidifier should be used to reduce relative humidity, and when it drops to a safe level, turned off. This way you never have the device running when you don’t need it, which helps monitoring and maintenance less frequent and much easier.

Leaving a dehumidifier running while on vacation poses several risks like water leakage and overheating resulting in damage of the unit or much worse, starting a fire. However, with the right device, which has the right features, you just might pull it off.

There has been many instances of people doing this, even running an AC all through their vacation in the home, and coming back to meet the home with no damages incurred.

Addressing the question specifically, if the dehumidifier is left running unintentionally, then you probably didn’t take the necessary precautions, and if you can return home, or call in one of the neighbors to cut power to or simply shut it off on your behalf, do so.

When intentional however, ensure the dehumidifier makes use of a continuous drain, so that the tank never gets filled, causing it to shutoff.  Also ensure there is proper air circulation in the location it is, and the device has a working auto defrost function to prevent overheating.

Dehumidifier while sleeping- is it safe?

Most dehumidifiers can handle overnight running with relative ease far as there is no err on your path (maintenance, air flow, no blockage, leakages), it is very safe to use overnight. It is recommended that the device has the auto defrost feature however, if for any reason it starts to overheat, so it goes off.

Still on the question are dehumidifiers safe to leave on? The other important feature to have is an auto shutoff on tank over flow. With these two features having your back, the dehumidifier can run without the fear of a fire or overflowing all across the night safely.

However, keep in mind that you would still have to battle the problem of noise emanating from its operation, especially the compressor when taking in and exhausting air. Also, if your tank capacity is not very large and you don’t make use of a continuous drain system, then there is no point in leaving the device running all night in the first place.

Conclusion – can you leave a dehumidifier on unattended 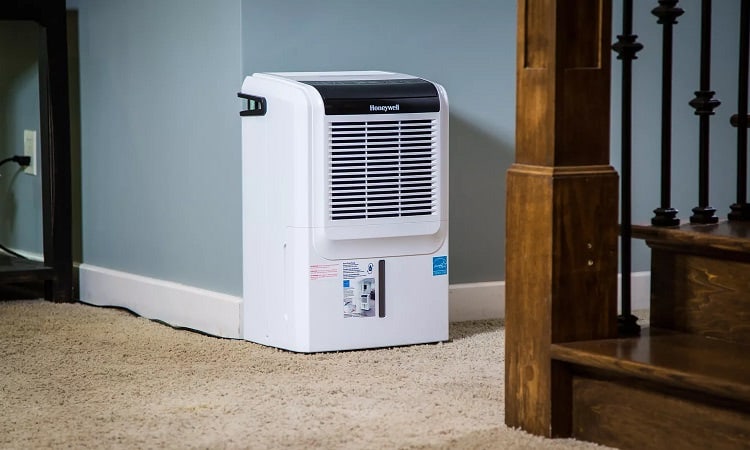 YES and NO. Dehumidifiers are man’s best bet when battling high amount of moisture, and they could well be the thin line between staying healthy and falling sick.

For this reason, they are well deservedly important, and also safe to use both when at home, and left running unattended to. We recommend that for a unit to be used unattended, it is important that it possess the auto defrost, and auto shutoff function.

These two features combines ensures that the machine continues to work only in safe condition, the auto defrost responsible for monitoring overheating, while auto shutoff for keeping tabs on condensed water level in the tank. trust us, you wouldn’t want to leave a dehumidifier unattended without cover from both of these features, as the resulting damage could be catastrophic, and would surely cost quite a sum of money depending on impact.

Previous Post: « What Appliances Give Off Carbon Monoxide
Next Post: What Causes Low Humidity In a House »