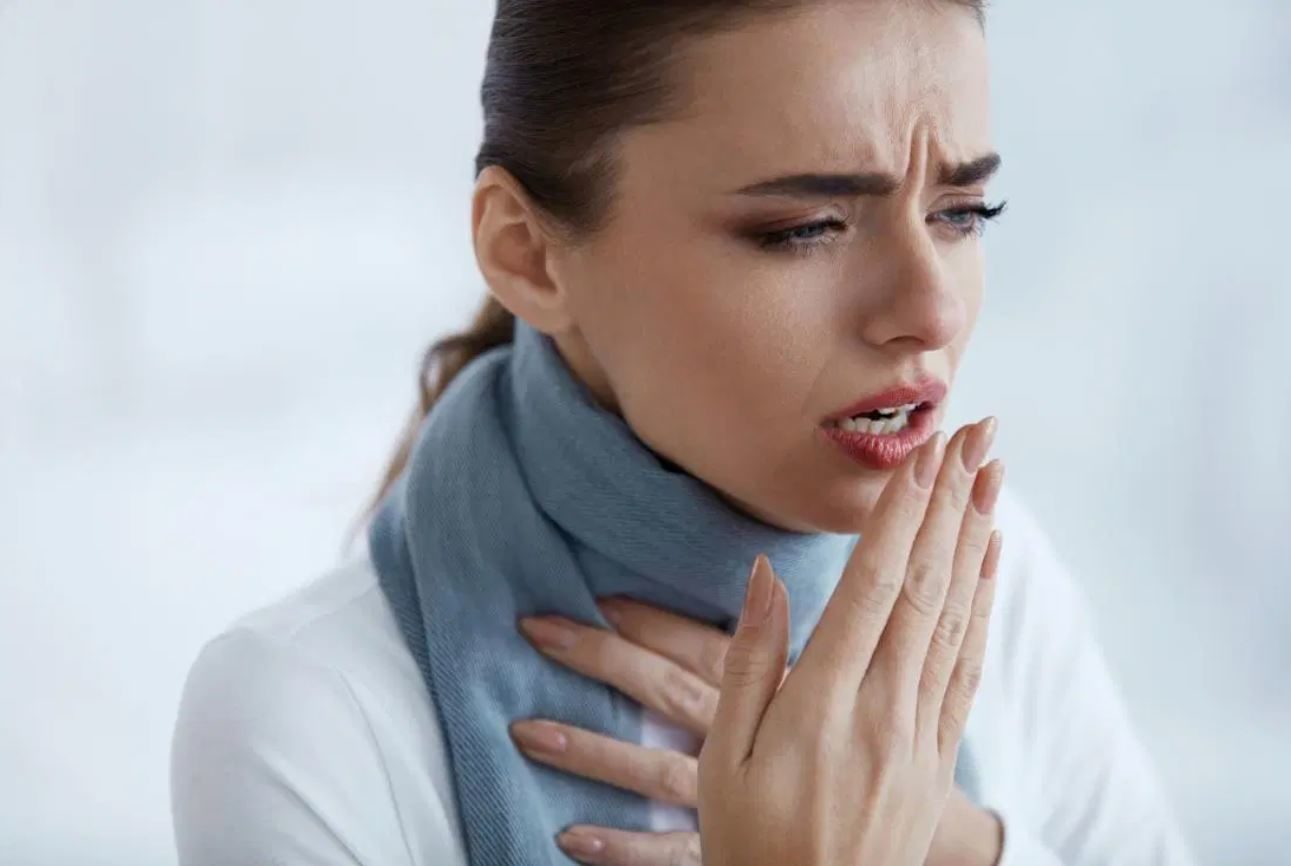 Every form of infection or disease of the lungs is characterized by different symptoms peculiar to their nature; however, there is one they all share in common, which is a persistent cough. A cough could be caused by so many reasons, from as complicated as chronic bronchitis, to as simple as a cold, one thing we can all agree on is that it is very uncomfortable and have to be remedied in any way possible. Basically, when dealing with humidifier causing cough, Knowing what to do is very paramount to avoid aggravating the symptoms

Humidifiers are designed to create and release moisture into the atmosphere in a completely harmless way. However, poor maintenance habits can quickly turn your friendly humidifier into morphine for infections. This article would serve as a guide for everything you need to know about humidifiers aggravating a cough, what causes it, and how to handle the situation with immediate effect.

Can a humidifier make a cough worse – Here are Likely reasons

There are situations when a humidifier rather acts as the opposite of what it was designed to do, worsening the situation rather than remedify it. 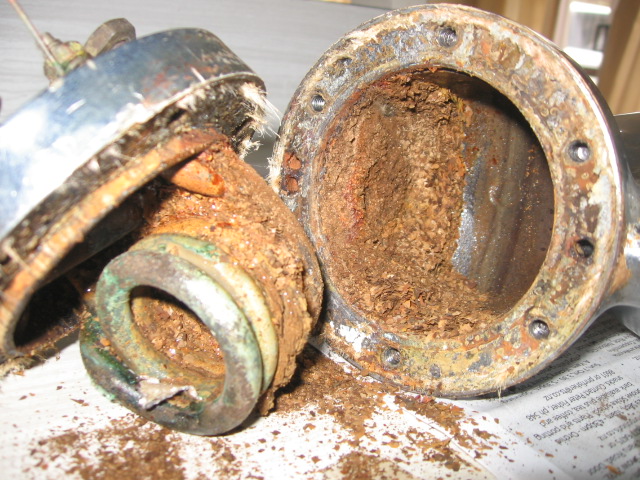 Humidifiers causing cough could only result from either a poor maintenance culture on the user’s side of the device has overworked, raising relative humidity beyond the recommended safe mark of 60%.  Before we go on, note that anything that supports the infection can essentially lead to worsening symptoms like a cough.

The first condition of poor maintenance occurs when humidifiers aren’t well taken care of as per general cleaning, use of proper water type, and filter replacement frequency.

Humidifiers themselves are prone to moist due to the high amount of water vaporize while operating, and when not cleaned properly could lead to the development of mold and consequentially spores into the mist, which gets into your air.

Breathing in mold spores is not in any way good for the body, especially those who already have existing allergic reactions. This worsens health rather than bring much-needed relief. There is also a problem of white dust as a result of mineral contents in the water.

White dust released alongside the mist creates a hard to clean coating on virtually every surface it lands on, and more dangerously, supports the growth of bacteria and other organisms that are dangerous to your health. This is why distilled water is most recommended to be used with a humidifier, except there is a demineralization crystal present.

Most humidifiers also make use of filters, which helps remove impurities from water used, and depending on design, some can even deal with mineral properties. They are called demineralization filters.

These filters either have a life span, after which it is to be changed or should be cleaned regularly to avoid dirt build-up. In a situation when users fail to get this done properly, built-up dirt and mineral content eventually finds their way to the mist and air, causing more harm when breathed in.

The last situation is when a humidifier releases too much moisture into the home, making it conducive for mold growth, and other high humidity friendly infection-causing organisms. Breathing in these infections causes worsens health conditions, characterized by severe symptoms display like a cough.

Also Read: What causes low humidity in a house

Is it bad to inhale the vapor from a humidifier 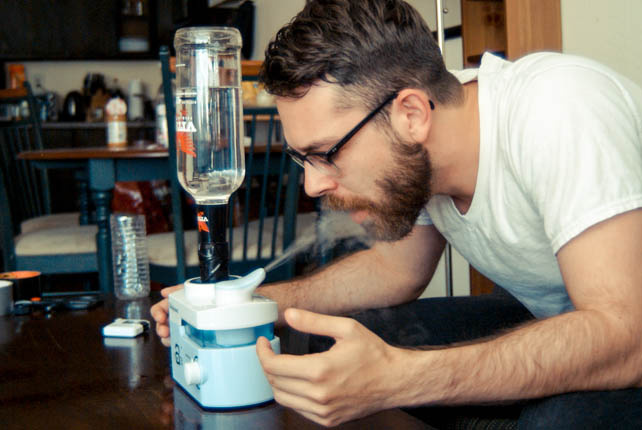 One way or the other, every humidifier user ends up inhaling the vapor released from a humidifier, either directly, after it becomes water vapor in the atmosphere. Inhaling it directly, however, differs slightly from inhaling after it adds to relative humidity count in the atmosphere. This is due to the obvious reason of one having a direct passage and the other not so.

Primarily, inhaling this vapor poses no risk if the humidifier is a cold mist type only, and we recommend you never try this with warm mist or vaporizers. This is as a result of the high chance of burns they pose, adding to your health issue of the already infected throat causing cough. However, doing this even with unclean cold mist devices also exposes you directly to harmful organisms as a result of mold build-up or mineral contents contained in the water. These are very dangerous when allowed into the body.

For this reason, it is not recommended to always breathe in the vapor from a humidifier directly but rather allow it to affect the humidity in the air first, through which it is eventually breathed into the lungs, bringing the much-desired relief. Go the other way, and you could end up with mold spores, bacteria, and white dust down your nostrils if the humidifier is in a dirty condition.

Also Read: How do you know you need a Humidifier

Is a humidifier good for cough?

The primary function of humidifiers, which is to increase the total amount of relative humidity in the air, is good for cough. Cough is aggravated by cold air, which is a result of low humidity. This low humidity leaves the nasal airways very dry and susceptible to infections and irritations, resulting in cough. When this dry state is compromised by breathing in moisture-filled air, the result is more moist airways, as well as relief from infection symptoms, including cough.

What does a humidifier do for a cough? 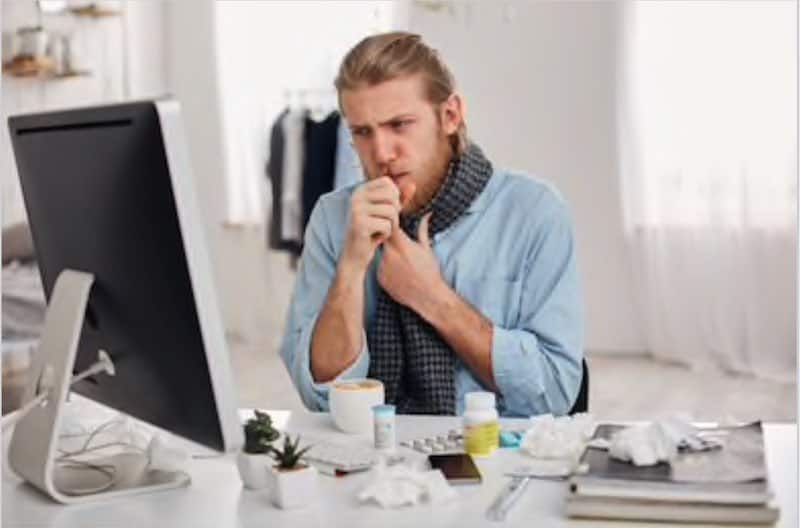 Breaking down the process further, humidifiers relieves cough by attacking the conducive habitat, which sponsors their wellbeing.

As earlier said, infections during the cold season thrive on a lack of moisture, which is why a simple cut on your arm could take a longer time to heal or even get infected easier than in summer. This infection is a result of the now dry surfaces of a normally moisture-filled area, and it is the same case with the nasal airways where air flows through.

Breathing in dry air over and over again dries up moisture in the lining real fast, leaving it in a condition that it normally never is. This situation leaves the path exposed to airborne viruses, which could cause all sorts of infections.

Humidifiers counteract this by simply adding more moisture to the air, which eventually flows through the pathways during breathing, bringing back moisture, and an unconducive habitat for the infections, relieving its symptoms as a result, including cough.

This is a simple break down of the functional principle of a humidifier working in perfect condition, and with proper maintenance. It could, however, differ in some other situations, like poor device state or use of mineral-filled water, poor filter conditions, etc. this flip side would be discussed further in our next consideration.

What to do when humidifier makes your cough worse

When stuck with a humidifier causing cough, what to know, and what to do could well be the difference between your health going critical and not, which is why we would be discussing it shortly. 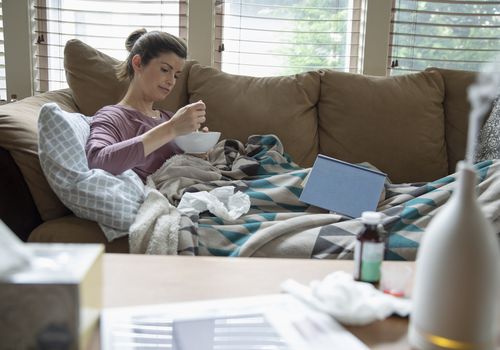 The first step to carry out is to turn off the device immediately. In its off state, the humidifier should be opened and carefully inspected for contaminations (including its water tank and mystifying stages), especially nukes and crannies that are not easily visible to the eyes. After this, every filter in the humidifier should be inspected and washed thoroughly or replaced accordingly.

It could also be that your device is creating too much mist than you need; therefore, we recommend installing a hygrometer in the home to keep tabs on immediate humidity. Better still, if you can, purchase a device with a humidistat that would make monitoring and control much easier without your constant input.  Asides these procedures, a humidifier should function properly, and if it still makes you cough, then visit a doctor.

Humidifiers are lifesaving gadgets that come in handy when dealing with domestic body infections, especially during the cold season.

They can, however, work to your detriments when not used properly, which is why it is important you take time out to study how to use one, as well as the right conditions of operation.

Previous Post: « What causes low humidity in a house
Next Post: Feeling Sick After Sauna – Here Are Five Reasons Why »