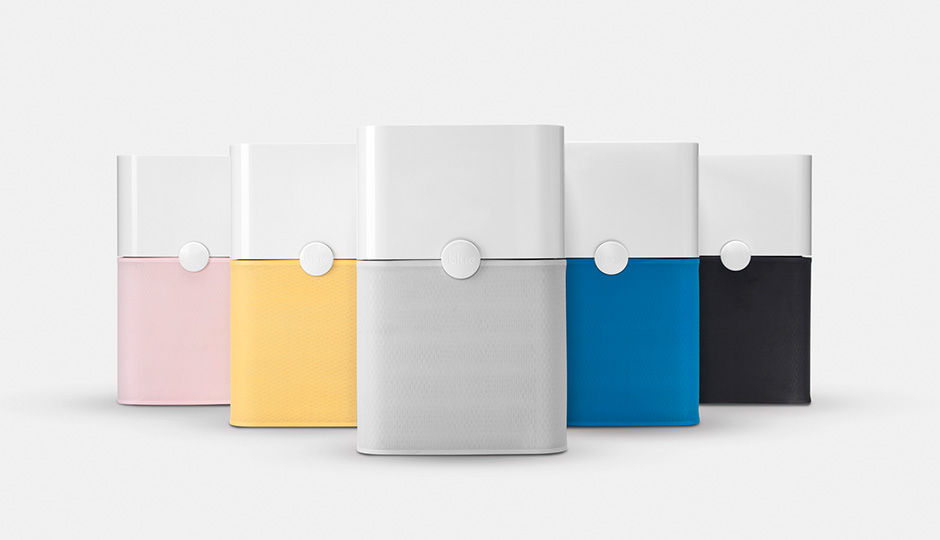 The unit has been tested to effectively remove allergens that cause pollutants and odors in the home, helping to breathe and sleeping more comfortable at every moment. Henceforth, It is one of the best air purifiers in the market.

Blue pure 211+ Review: Features you will get

First of all, let’s check what is inside the box of a newly purchased Blue pure 211. You find the 211+ purifier, particle filter + carbon filter and the 2 fabric extra pre filter. 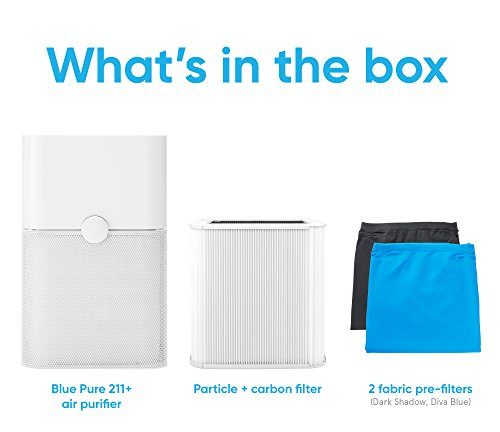 This air purifier is designed with much consideration by the manufacturer, providing options of switching between several fan speeds at the push of a button depending on the choice of the user, with higher fan speeds of course designed for environments with high contamination level than regular.

A 3-stage filter level ensures that all manner of contaminant sized and types are dealt with by the unit.

The first line of air filtration is a washable pre-filter that is responsible for removing large sized particles from the atmosphere like dust, dander, and another floating lightweight contaminant. This pre-filter is available in many colors. Therefore you get to pick and purchase the precise design you would want for your home design.

A particle filter which is a polypropylene filter come in the next  stages, with actions that remove every air borne particles and odor causing contaminants up to the size of a virus, which include pollen, smoke, molds, allergens, and bacteria.

This is added inside the particle filter to battle against the smoke, Odour, gases and VOCs.

The blue air filter is ultra-thin in size and is made of fibers with several layers, reducing its tendency to become too cloggy and give out a repugnant smell or even the dirt getting back into the atmosphere.

This air purifier comes with two pre-filters of different colors included, and the design of the contaminant filter helps reduce the noise level during operation. It is very quiet, and at the lowest setting, it can barely be heard except you come really close with your ears to the device.

An added rating that raises the credibility of using this air purifier, it’s the association of home appliance manufacturers (AHAM which is a standard independent association) test.

This gave a result of 350 cubic feet per minute, meaning it would clean the air in a 540sqft room about five times in an hour. With a result of this height, it can serve rooms or medium to large sizes (up to 600sqft).

It is energy star rated, and the filters should be replaced every six months. 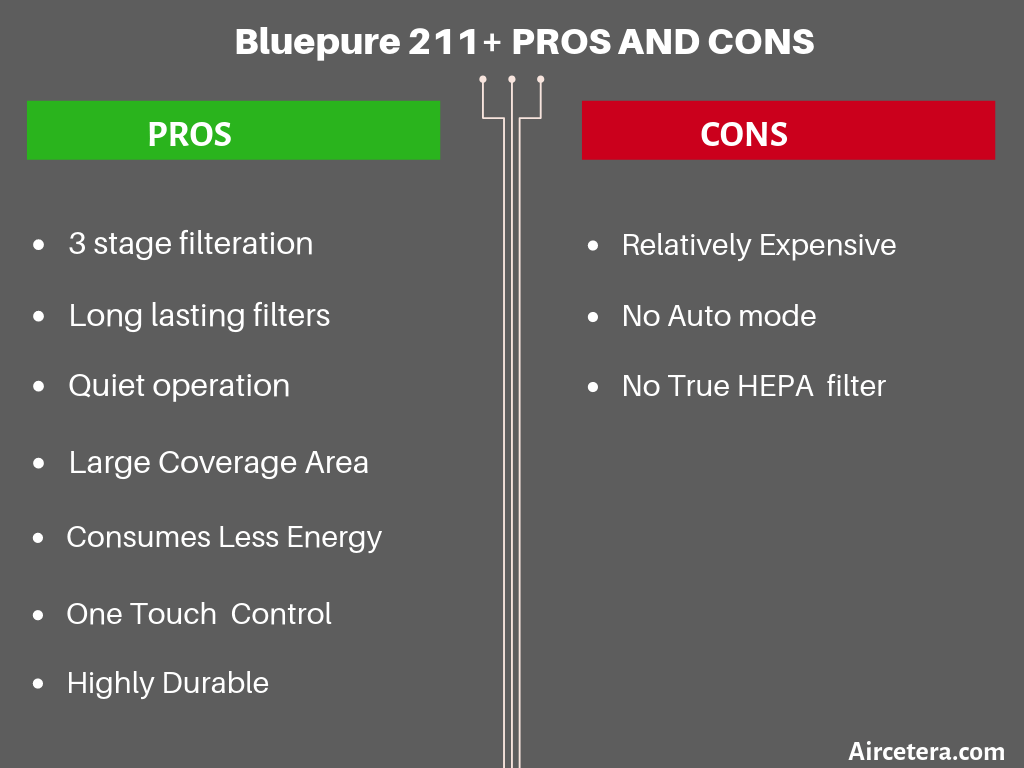 The blue pure air purifier makes use of a particle air filter that does an excellent job in removing contaminants and allergens from the atmosphere and doesn’t possess a true HEPA filter.

With the true HEPA filter being recognized and recommended by most international bodies around the world, its absence is a flaw in the build of the blue pure 211 due to its tested ability to capture up to 99.97% of particles up to 0.3 microns in size.

Although this is a real put off, but the particle filter used in the pure 211+ boasts an almost impressive test result when compared to a true HEPA filter. It combines the design of an ultra-thin fiber material which is naturally anti-bacteria and free of chemicals, making use of both mechanical and electrostatic filtration technology while being recyclable as plastic.

Tests were carried out, in which the filter was used to run a humidifier in a room of about 200sqft for about 1 hour. This was done to compare its efficiency with a true HEPA filter, and it came out with a result of the highest efficiency being up to 99.95% when compared with microns as smalls as 0.3 microns. The particle filter type is very easy and cheap to replace which is an added advantage in the blue pure 211

The blue pure 211 is designed with options on three fan settings available, allowing you to choose  the speed and hence extruding capacity of the unit at the moment (depending on how contaminated the air in the atmosphere is). 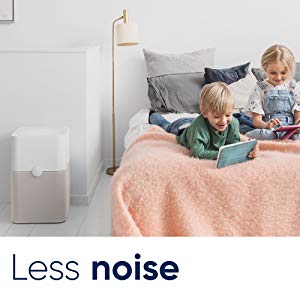 When running on the lowest setting, this unit is very quiet, but the noise is a bit louder on the medium setting, and when increased to the maximum, it becomes a step louder (which is considered as white noise of 31-56 db(A) which is easily negligible or be of help at night periods before sleep for some) while consuming much more power than your bills would smile at.

For this reason, we would advise you only run on the highest setting for a short while, or you can extend the period in cases of concentrated contaminations.

Also Read: Best air purifier for the price under $100

When the pure 211 air purifier was tested with cigarette smoke, it boasts a CADR result of 350cfm, which is really impressive and stands out amongst air purifiers more potent like the Honeywell HPA300.

This shows the speed at which it cleans a room, and with the presence of an activated carbon filter among the stage of filtrations, it effectively absorbs odor-causing molecules in the atmosphere including smoke, gases, and VOCs.

Therefore, if one of the primary reasons why you need an air purifier is due to a high rate of cigarette consumption in your home or office, then the blue air 211 is an undoubtedly good fit for you.

This air purifier, ranking as one of the best out there, alongside having a high number of recommendations in 2021, the company boasts several local stores around the US while having customer care service support lines both phone wise and through emails.

For these reasons, getting in touch with the agency is never a difficult task, as their service line is reached at 888-258-3247 or email at [email protected] The service line is always available for the quick response all times except weekend and US recognized holidays.

At purchase, there exists an automatic one year warranty that could be redeemed in case of a fault or sudden damage. This warranty duration can be extended by a further year if the product is registered within 60 days of purchase, and this can be done through the blue air friend mobile app.

After this registration, the warranty is extended for a further year, making a total of two years. Be careful not to take the unit outside the United States or Canada, as this would completely void the warranty.

Although this general concern has been addressed in the preceding part of this article, one might still wonder how this unit would fair when faced with a condition or high odor pollution created by kitchen activities.

Speaking with regard to this particular scenario, the 211+ is built with a carbon ring amongst the 3 stage filtration, whose specific purpose is to remove odors from the air while filtering. These odors include smoke from burns in the kitchen, alongside smells from food which, although pleasant, could rapidly become discomforting with visitors in the home.

One common automatic feature that comes in handy when making use of air purifiers is the auto mode. This is a unit’s ability to sense the current air quality at every moment and adjust its fan speed accordingly to maintain a clean, fresh air. This is a downside of this specific family of air purifiers (blue pure family), as it does not possess a mode like this. Instead, the user would always have to toggle between the different fan speeds manually to suit the needs of the room.

This family of air purifier once again doesn’t possess a remote control function and cannot be used with the smartphone app through Wi-Fi for control. It only possesses around touch button which controls the fan speeds.

Since we have earlier established that this model doesn’t make use of the true HEPA filter that can be bought in the market and easily replaced, then you should know this.

The carbon filter is interwoven with the particle filter as a two in one filtration stage; this means that the two filters combined get replaced at the time of an entirely new filter change which is not frequent as the filter has a long lasting life. The blue air 211+ does not make use of the true HEPA filter.

Considering all these several qualities of this unit being matched with the price it goes for, we would say it is a pretty impressive unit and would recommend it for medium budget customers out there.

The CADR rating notably boasts an impressive number and even test result, when matched with other top air purifiers in the market even though there is no HEPA filter being used.

The ultra slim particle filter helps ensures easy and quick air flow rate while having an interwoven carbon filter in it to deal with smells other chemical pollution in the air.

Being customizable also comes in handy for those after looks alongside quality, making it more attractive as it brings something extra to the table, while the cool touch sensitive button and energy rating makes is more digital and economical.

The unit also has a washable pre-filter, although already coming with an extra one, and particle/ carbon activated filters that last long although replacement could be quite expensive.

In the end, the absence of a true HEPA filter would always stand against the rating of this unit, though the presence of a particle filter that boasts almost an impressive performance.