At a certain stage of our life, healthy living becomes our topmost priority. Even in a bid to get that healthy life, we are too careful not to risk our well-being. Air purification by ionizers in air purifier is one of the recommended ways of getting air cleansed.

However, someone who wants to get the purest air out of the surrounding breeze would think of buying an air purifier, and then the next question that comes to mind of such fellow is that are air purifiers with ionizers safe? Will ions in them harm me? Am I not risking my health? These questions are very reasonable, especially for adults.

It comes by no surprise that many of these questions about air purifiers safety are as a result of the technology behind its invention, i.e., the use of ionizers and the controversy about Ionic breeze back in the days.

This brings about various jargons prediction over the internet that air purifiers are harmful to health. It then brought about fear to the mind of people about buying the air purifier or not.

In this post today, I will answer your question without been bias. I can even assure you that after reading this article, you would be able to decide on your own if you should get an air purifier or not.

The very first thing you should understand is the fundamentals of air purifiers with ionizers, how they operate, what they are made of and how they help purifies the air.

How does air purifiers with ionizers works?

By construction, ionizers are known to produce negatively charged ions which are capable of purifying. Therefore, air purifiers make use of ionizers to emit the ions that sterilize the air.

Air purifiers work based on the positive and negative charges, which are attracted to one another in such a way that:

Controversy over the safety of air purifier with ionizer

Times without number, there has been a significant argument about the safety of air purification using ionizer. This even led to misinformation on many blogs about how harmful air purifiers can be to your health. You should consider this statements as a falsified content because no research as ever concluded that air purifier hurt anyone.

Most of these jargons are built on what happened to the ionic breeze in 1990s. In case you don’t know, Ionic breeze company was the first set of air cleaner line been produced by the sharper image. Back in the days, sharp image sold a great ton of this air cleaner and the product was really appreciated by consumers.

Early in 2005, consumer report gathered claims that they researched air beeze’s ionized air purifier to contain a high amount of ozone level that could be very dangerous to the health of consumers. This made people had the knowledge that instead of purifying the air, air breeze could have polluting it but no accurate fact was established. This led to the crash of the market in 2008 after a lawsuit was filed against the company which pushed it into bankruptcy.

What no one would tell you about air purifier with ionizer

Our bone of contention here now is that if the cloud of negatively charged ions is released into the air, is it safe to inhale them into our body system i.e., are air purifiers with ionizers safe? Yes, they are but it depends on the type of ionizer producing it.

To even shock you, negatively charged ions are all around you in our environment. They are often emitted in great amount whenever there is a strike of lightning and thunder or even a rainfall. These are also researched to be involved in mood improvement and energy increment.

Now here is what you don’t want to miss. Air purifier can be of 2 types which are the

Electrostatic precipitators function by releasing negatively charged ions into the room via corona discharge.  Then the ions attach themselves to the positively charged ions for them to be collected over the filter plate which can be wiped off the plate later. This is the most common forms of air purifier with ionizer in the market.

Meanwhile, the ion generators release ions into the air via corona discharge or UV ray, for it to cleanse the air without making use of any filter plate. Only few ionizer air purifiers in the market make use of this technology. You can identify them by the absence of a filter plate. But where do the dirt get attached to, It’s your bed, table, corners of the ceilings etc. 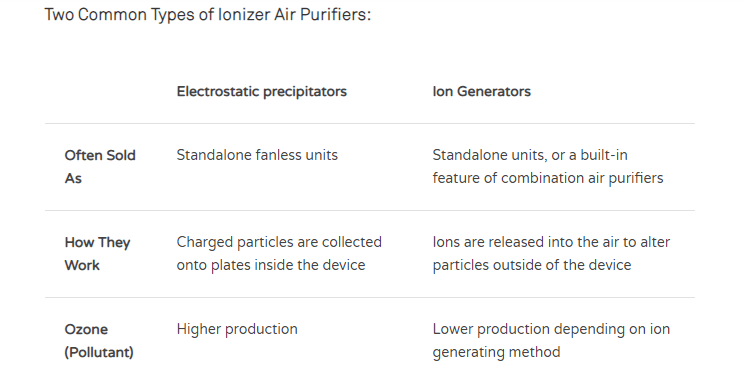 From the table above, you can observe  that some of the ionizers in the market are not safe because they generate a large range of voltage along a small volume of air which often triggers the production of ozone in varying degrees. Ozone according to EPA can cause ailment such as short breath, chest pain, irritation of throat among many others.

Some of the air ionisers have been guilty of this especially the HEPA air purifiers. To this fact, the U.S environmental protection agency gives a standard range of ozone emissions that can be consumed by the people. This is shown in the table below 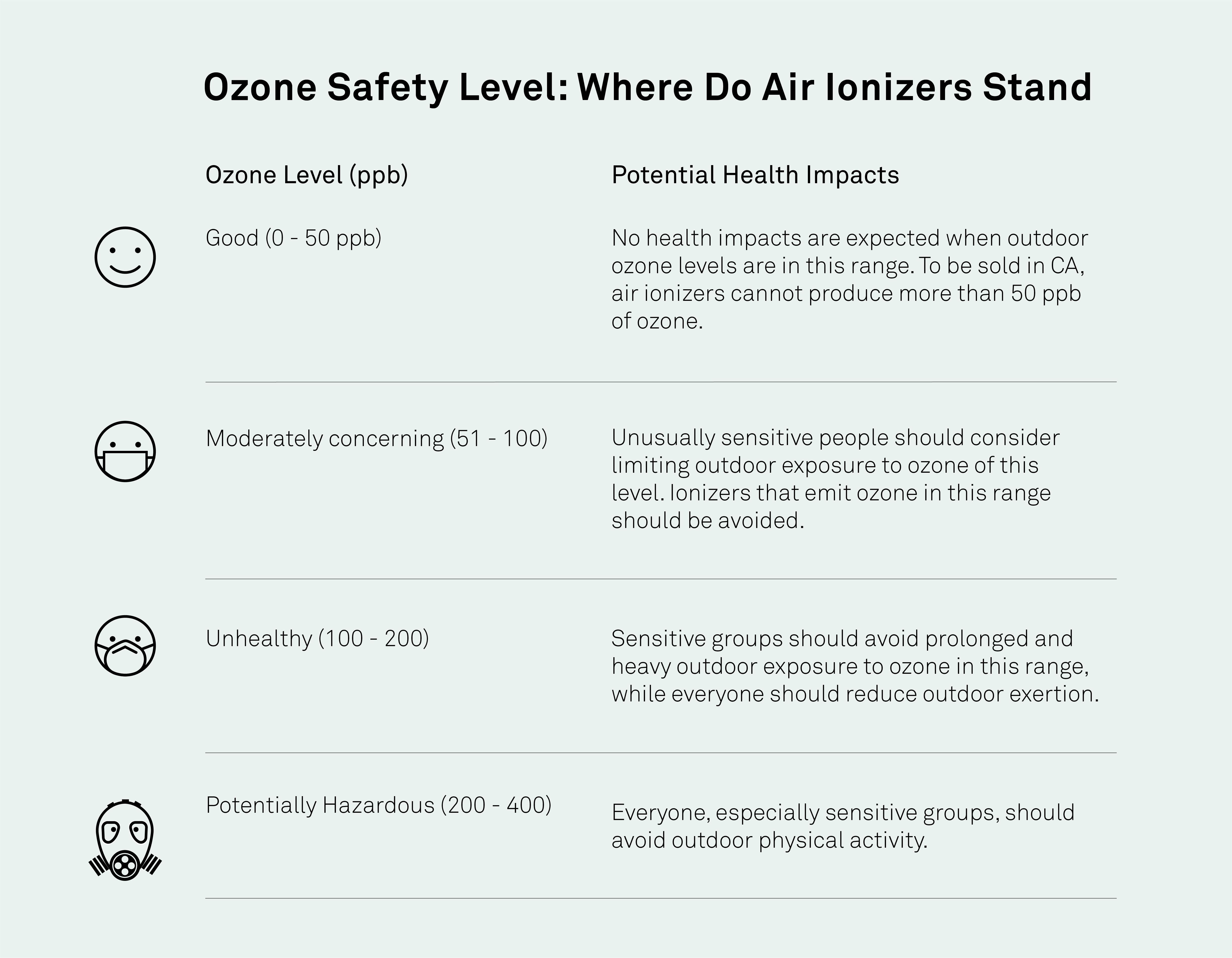 The standard above illustrates that people shouldn’t be exposed to amount higher than 0-50ppb which is the range at which the modern air purifiers are functioning. If you are getting air purifier with an ionizer, you should check well for the range of probable ozone emission of the ionizer.

As a matter of fact, air purifiers in this century has been constructed to taste, with the answer to your questions in mind of the producers. They offer a wide range of purification options with some having air purifier with ozone generator that can be controlled and some others have no ozone generator.

You should be very careful of air ozonizers that are labelled as air purifiers. You check the specification to be sure that it doesn’t emit ozone and if it does, it doesn’t go above 0.05ppm or 50ppb.

Previous Post: « How to Dry out a Basement Fast : A 2 Hour Step by Step Guide
Next Post: The Best Space Heaters for Apartments – 2020 Buyer’s Guide »