What is ozone and where is it found?

Ozone is a molecule made of three oxygen atoms. It is mainly found in Earth’s atmosphere. Discovered in a laboratory in the mid-1800s, it wasn’t discovered in the atmosphere until later when chemical and optical measurement methods helped to confirm its presence in the sky. Ozone is explosive in concentrated amounts and assists in industrial processes such as water purification. It’s also easily detected in the air due to its pungent odor. 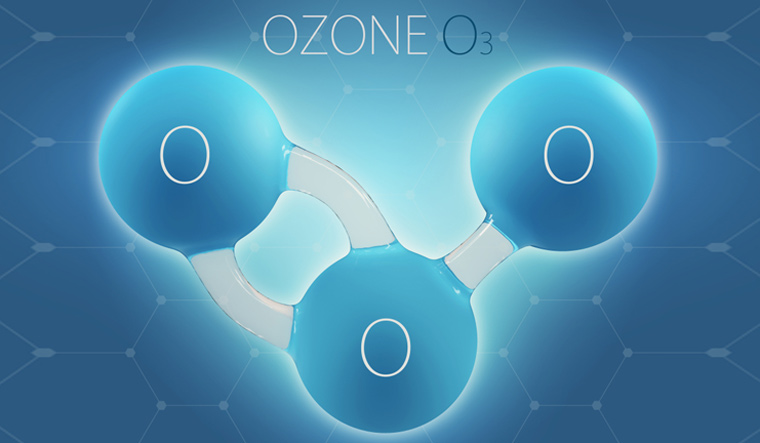 Ozone makes a huge impact on Earth, even though there are relatively low amounts of ozone in the atmosphere. Even where the concentration of ozone is the greatest, there are only a couple thousand ozone molecules for every billion air molecules. Air molecules include Oxygen, or O2, and Nitrogen, or N2. Since there is so little ozone in the atmosphere and it already has a significant effect on Earth, one can imagine that the ozone humans produce also has a significant effect. That is how humans create ozone near the Earth’s surface, but how is ozone created in the atmosphere, to begin with?

How is ozone formed in the atmosphere?

This depends on the zone the ozone is formed in. In the Stratosphere, the ultraviolet light causes the formation of ozone. The reaction includes sunlight and oxygen molecules. Solar ultraviolet radiation splits oxygen molecules, creating two very reactive atoms of oxygen. These are then joined to oxygen molecules to form ozone. In the Stratosphere, because of constant sunlight, ozone is constantly being formed. This is especially true in tropical areas. Ozone is also continually being destroyed, to keep the balance. Ozone reacts with natural and manmade molecules in the Stratosphere, and in each of these reactions, an ozone molecule is lost and another chemical molecule is gained. Important molecules that help keep ozone balanced in the stratosphere are hydrogen and nitrogen oxides, as well as those containing chlorine and bromine.

In the Troposphere, gases that result from pollution are much more common, and these gases encourage some, but not all of the Tropospheric ozone formations. This ozone production usually involves hydrocarbon, nitrogen oxide gases and ozone. They require solar ultraviolet radiation to finish the reaction. Fossil fuel use on Earth produces gases such as hydrocarbon and nitrogen oxide gas, otherwise known as pollutants, and this is how human activity increases ozone production. This Trophosperic ozone does not contribute to Stratospheric ozone, though. The Stratosphere is about 10.16 kilometers or 6.10 miles above Earth’s surface, and typically, this ozone does not travel this far. Even in the cases in which air from the surface does travel to the Stratosphere, remember, ozone makes up only a small fraction of ‘air molecules’, so the small amount of ozone makes no difference. There is a balance in the Troposphere as well, ozone is again destroyed by naturally occurring chemicals and chemicals produced by humans. In this zone, it is also close enough to Earth’s surface to be destroyed or used by soil and plants.

How is ozone distributed in the atmosphere?

‘Total Ozone’ is defined as the total amount of ozone in the atmosphere above one given point on Earth’s surface. This is typically measured in DU or Dobson units. Measurements around the globe vary between 200 and 500 DU.
The distribution of ozone is dependant on air circulation in the stratosphere. As stated before, the most ozone is produced in tropic zones due to high amounts of solar ultraviolet radiation, but the tropic zone is not where the majority of ozone stays. Air circulation in this high zone in the atmosphere slowly moves ozone towards the poles. Middle and high latitudes harbor the most ozone at all times of the year.

Although the distribution of ozone remains somewhat constant throughout the year, there are seasonal changes. In fall and winter, the transport of ozone towards the poles is increased, and this leads to a high of ozone in high latitudes during the spring season. This can clearly be observed in the Northern Hemisphere, though not the Southern Hemisphere. The Southern Hemisphere typically has less effective transportation of ozone. In addition, during portions of the year, the Ozone Hole can be found in the Antarctic. Another process that causes ozone to decrease to its lowest values by fall is the continuous light at the poles during summer. This continuous sunlight leads to a decrease in ozone due to the conversion of nonreactive halogen source gases into reactive ozone-depleting gases.

Natural variation is ozone are common. Two main things can cause ozone to changes in a specific location. First is natural air motion that can blend air between regions of the stratosphere. Weather patterns in lower layers of the atmosphere and just how the wind is moving can affect where ozone is found. If two regions with different ozone concentrations are mixed, it can cause variation in the total distribution of ozone very easily. The second process that can cause a shift in variation is chemical processes that lead to the formation or destruction of ozone. Mentioned before, even a small shift in the environment can cause overall ozone to increase or decrease. For instance, if an area is experiencing a lack of sunlight for any reason, ozone production is changed. In the stratosphere, ozone is produced as a direct result of sunlight, or solar ultraviolet radiation. A decrease can cause an overwhelming decrease in ozone because while the ozone-producing processes have been limited, the ozone-destroying processes are still in full force. Still, ozone levels are generally higher at the poles and lower at the equator.

How can we measure the amount of ozone in the atmosphere?

Ozone is typically measured by aerial equipment, but this equipment can measure the molecule in several ways. Balloons, satellites or other types of aircraft generally lift equipment into the air to measure ozone. The instruments measure ozone in one of two ways. Either they continuously draw small samples of air into a testing chamber or they use ozone’s absorption and emission properties to measure it. By using both of these methods, one local and one long-distance, scientists can monitor changes in the distribution and amount of ozone. This is important to monitor the safety of Earth and the impact of human actions on the atmosphere.

Local measurement devices measure ozone by drawing air into a chamber. Then, it is measured by its absorption of ultraviolet light, or by the amount of energy it emits when exposed to a chemical that ozone reacts to. These instruments are used regularly on aircraft to measure the ozone above a city or region. An ozonesonde is the last type of long-distance measuring instrument. This is a device that is small enough to be launched on a balloon. These balloons can even reach the stratosphere.

It has taken a long time to build these specified machines. The first instrument developed to detect ozone movement was not nearly as modern as these; developed in the 1920s by Gordon M.B. Dobson, this Féry spectrometer recorded measurements by allowing Dobson to examine the wavelength of sunlight on a photographic plate. Dobson quickly distributed these around the UK and the rest of Europe and this helped him make crucial discoveries about the nature of ozone. About 10 years later he invented the Dobson spectrophotometer, a device that measures two different wavelengths of solar ultraviolet radiation. One of these wavelengths is heavily affected by ozone the other is weakly affected. By comparing these he was able to see how much ozone was affecting the former wavelength compared to the other. If it was very affected, he knew that there must be significant amounts of ozone in the atmosphere at that time. In 1957, instruments like these were widely distributed to allow scientists to learn more about ozone in the atmosphere. These devices are often recalibrated and compared to make sure they are accurate and they have given scientists a great picture of the effect of ozone-depleting substances on the atmosphere. Dobson contributed a lot to the scientific effort to learn about ozone, and this is the reason the unit of measurement for ozone is named after him.

How are humans depleting the amount of ozone?

Humans are depleting the amount of ozone in the atmosphere, but how? Well, there are six steps in the process of ozone depletion. Step one, halogen source gases, such as gases containing chlorine and bromine like CFCs, are released by both human processes and natural processes. While it is true that some natural processes produce ozone-depleting gases, human actions such as air conditioning and refrigeration produce these gases in too much volume for the balancing act of ozone in the atmosphere to handle. Step two, these gases are distributed into the atmosphere, and then they wait. This type of gas is not easily broken down and it survives rain and wind. With nothing to get rid of it, the gas builds in the atmosphere, widely distributed by wind and weather patterns. In step three, these gases are slowly transported to the stratosphere. Next, in step four, the gases become reactive.
Although they were not reactive in the troposphere, the increased solar ultraviolet radiation in the stratosphere allows the unreactive halogen gases to become reactive halogen gases. This may take time. Conversion time is directly related to the lifetime of the substance, and while the gas may cycle between the stratosphere and troposphere for some time before being converted, eventually the gas is converted and can react with ozone. Step five is the reaction itself. There are different rates of ozone-depleting reactions in different parts of the atmosphere. The reaction rate is highest near the poles. In some places, the temperature is low enough that the gases can react to form more gases that are able to react and deplete ozone. Due to this cycle, reactions at the poles can destroy large amounts of ozone at a time. The final step is removal. Now, these gases can be diluted and absorbed by rain, and when they finally cycle back into the troposphere, that is what happens. The gases are then brought back to Earth. Specific halogen source gases are able to transform into reactive gases in the troposphere, but as a result, they can be absorbed by water, and most of the time this gas does not make it to the stratosphere. That concludes the steps of human-caused ozone depletion, but keep in mind, these gases are continuously being produced, so the cycle never stops.