The ozone first started getting measured from the ground in the 1950’s. This happened in Halley Bay, Antarctica. As technology grew satellite measurements started in the 1970’s. The Nimbus-7 satellite managed to get the first worldwide measurement of the Ozone layer. 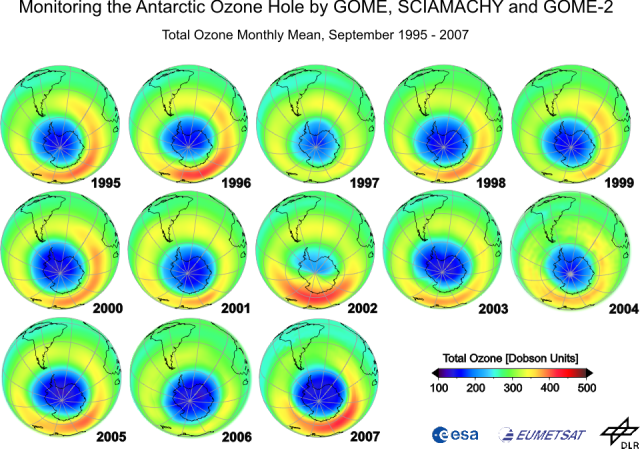 In 1928 chloroflourocarbons were created. These are non-toxic and non-flammable refrigerants. Chloroflourocarbon became available for commercial use in the 1930’s by a company called DuPont. These were built of just a single carbon atom with two chlorine atoms, and two Fluorine atoms all put together. The scientific compound for it was called CFC-12. In 1974 there was a study done in a laboratory that showed CFC’s ability to be able to breakdown layers of the ozone underneath a high frequency UV light. This study was performed and published by F. S. Rowland and M. J. Molina. If the CFC was only going by 7 percent for 60 years, it could demolish the ozone layer. With more and more studies coming out, the United States banner the use of CFC’s in aerosol cans in the late 1970’s. Other nations started seeing and conducting studies of their own and started following in the United States footsteps and banned the CFC’s in their nations as well.

British Antarctic Survey Scientists, Jonathan Shanklin, Brian Gardiner, and Joseph Farman, discovered another hole in the ozone layer in 1984. This hole is reoccurring hole that happens in the springtime in the Antarctic. Their study was published in May 1985 in the paper Nature. The study showed that the ozone had already dropped 10 percent below normal for January levels in Antarctica. By October levels were already down by 35 percent of the average for the 1960s. With such the dramatic change, they had thought that their equipment was faulty, so the scientists got satellite Nimbus-7 to go over the layer and confirmed the results that they had came up with.

The first ozone hole appeared over the Antarctic in the coldest area. This is because the process of breaking down the ozone layer works the best over the cold areas. From having land in the Antarctic continent, this causes much colder conditions than the Arctic being a body of water. Over the continent, the hole has grown an increased amount than normal. This hole comes at a bad time and lasts for almost 2 whole months. It happens right when sunlight begins again giving out a harmful dose of UV radiation. This causes a bunch of damage as it passes over heavily populated areas. The radiation causes anything from harming the immune system to skin cancer to upsetting the whole entire ecosystem and much more. The hole has now increased over the year of damage to 1.5 times larger than the whole United States. It’s even worse measured outside of the tropics. Ozone levels drop 10 percent during just the winters and drop 5 percent every year since getting measured in the late 1970s. In 2018, the hole was documented as being 3 times the size of the United States coming in 13th in size ranking in 40 years from NASA. With all the air warming up, it is actually helping smaller the hole. The hole is slowly but surely becoming smaller since the expansion in 1988.

The ozone hole grew 8.9 square miles over Antarctica before it started to get smaller in 2016. NOAA and NASA said that everything that they have been seeing is consistent with the expectation that they have coming for the hole. From everything they had learned from chemistry and the stratospheric weather this is how they figure how come it’s becoming smaller.

In 2010, the destruction levels in the ozone layer dropped 40 – 60 percent less than the previous 5 years before according to the MACC. This happened due to the ozone dropping in the level of chlorine. They found this out by using the SCIAMACHY instrument. The SCIAMACHY instrument is found on the ENVISAT European satellite. In 2010 as well, had the second smallest size in over a decade. The reduction came from unusual meteorological conditions.

Sudden Stratospheric Warming happens when the ozone layer warms up too fast. This happens between the beginning of July to the end of August. The Stratosphere is the layer that helps protect us from all the UV radiation. It is still unknown about these warmings and what it causing them. Their origin is in the Troposphere, the lowest level in the layers of the atmosphere. This is also where the weather forms and happens.

The ozone hole happens from the decaying powers of chlorine. Normally the chlorine is chemically bonded to nitrogen-oxides, but over Antarctica the chlorine is released due to the reaction process from the cold. The chlorine that gets left in the ozone layer can not be bonded anymore, so when spring comes around the chlorine starts doing its destructive work. If the temperature increased by just a couple degrees it would help save a few of the nitrogen-oxides to help decrease the amount of destruction. Slowly, by the measurements made by the American MLS instrument of the AURA satellite, show a slow increase in the amount of nitrogen-oxides.

The levels of the 2007 ozone hole are now over. The temperatures in the layer keep increasing over Antarctica. It’s even too warm for any of the stratospheric clouds to form and exist. Ozone values around this area are normally 300 DU, but lately with everything going on they are now around 220 DU and still dropping. This is now becoming normal for this area. In July, the lowest the temperature had gotten in the Antarctic stratosphere was on 70 degrees F and the hPa level was 50.Even though 30 was considered the normal for the hPa levels. August ended up seeing the largest ozone layer for that year alone and every year after that. The vortex became more circular in September and returned back to it’s normal elliptical shape and started warming up slowly after that. As the vortex warmed up the ozone hole started to shrink. A spring warming took place over the Pacific Coast of Antarctica which caused the ozone hole to become more symmetrical again Once the second warming died down in December the ozone hole became the largest of record for that day alone.

The ozone layer peaked and was marked at the highest point on September 13, 2007. The area of the hole reached 9.7 million square miles. That equals out to just bit bigger than North America which is the average. The rate is a big change for the ozone hole that was measured for the first time in 1970s.

In 2006, going over Antarctica, there was very low ozone values during the winter. Ozone destruction was more than 45 percent, a decent change since the 1980s. The stratospheric polar vortex remained stable and the halogen levels remained high. These were the main contributors for the record setting destruction.

In 2005, there was positive anomalies that prevalent from the total ozone of the Northern Hemisphere’s high latitude. These were associated with the weather conditions in the lower stratosphere’s temperature. The ozone layer peaked and was marked at the highest point on September 13, 2007. The area of the hole reached 9.7 million square miles. That equals out to just bit bigger than North America which is the average. The rate is a big change for the ozone hole that was measured for the first time in 1970s.

In 2004, there was very low ozone values again. The ozone depletion was still 45 percent more over Antarctica. The strongest levels of destruction in the ozone were between 15 and 20 km altitude. With all this going on the ozone hole diminished in depth and size. There was warming stratospheric conditions throughout the fall months in 2004. Chloroflourocabrons and stratospheric hydrogen chloride were both found to helped cause the reduction of the ozone substances. The ozone hole was only around for little time this year and was smaller in sized due to the meteorological conditions.

In 2003, levels of the ozone values were low again over Antarctica. The levels of the ozone depletion was at 40 percent. The strongest levels of destruction in the ozone were still in-between 15 and 20 km altitude. The ozone hole was the biggest it has ever been in the previous years. However, there was extremely low conditions in the ozone layer due to the weather being warmer throughout the Antarctic. The chemicals that are in the layer are still predicted to deplete the ozone.

In 2002, the Southern Hemisphere still had low ozone values over the Antarctica. Ozone depletion was still at an 40 percent compared to the 1980’s. The ozone still showed a strong destruction in-between the altitudes of 15 and 20 km. This year the ozone hole had only a short life and was quickly declining in size. The chlorofluorocarbons and the stratospheric hydrogen chloride reduced drastically due to the ozone depleting.

In 2001, there was low ozone values again over Antarctica. The ozone depletion was at 50 percent this year. 10 more than all the pervious years. The ozone layer was still showing a strong destruction in-between the altitudes of 15 and 20 km. Temperatures this year were very low for ozone production of polar stratospheric clouds within the vortex. The hole and the PSC area were among the biggest within the years previous. This year had one of the longest durations since 1982.

From 2000 to 1993, all of the surveys were done by the British Antarctic Survey Faraday station. The Antarctic ozone hole is a phenomenon that happens around the same time every year and has been recorded since the 1970s. All because of the international Montreal Protocol, the production of the products that help cause this phenomenon are a lot less than before. CFCs are not expected to make their maximum concentration in our atmosphere until the turn to the next century. The Antarctic ozone hole is shown to just decay and worsen until that occurs. The layer is predicted to become normal once again until the 2070s.