ODP is a number that refers to the amount of ozone depletion caused by a
chemical substance. Consumption of ozone depleting substances has largely
been reduced in the past 20 years.
Data source: GEO Data Portal, compiled from the UNEP Secretariat for the
Vienna Convention and the Montreal Protocol (UNEP 2010)

The most commonly
known ozone depletion chemicals (ODCs) are the CFCs or chlorofluorocarbons. Over
the last 30 years man-made CFCs have been the main cause of stratospheric ozone
depletion.

CFCs however, are
not the only ozone-depleting chemicals. Other ODCs include the methylhalides,
carbon tetrachloride (CCl4), carbon tetrafluoride (CF4), and the halons which
contain bromine instead of chlorine. Such compounds are called halocarbons.

Carbon tetrachloride
(CCl4), despite its toxicity, was first used in the early 1900s as a fire
extinguishing agent, and more recently as an industrial solvent, an agricultural
fumigant, and in many other industrial processes including petrochemical
refining, and pesticide and pharmaceuticals production. Recently it has also
been used in the production of CFC-11 and CFC-12.

Methyl chloroform,
also known as 1,1,1 trichloroethane is a versatile, all-purpose industrial
solvent used primarily to clean metal and electronic parts. It was introduced in
the 1950s as a substitute for carbon tetrachloride.

Halons, unlike CFCs,
contain bromine, which also destroys ozone in the stratosphere. Halons are used
primarily in fire extinguishers. Halon-1301 has an ozone depleting potential 10
times that of CFC-11. Although the use of halons in developed countries has been
phased out since 1996, the atmospheric concentration of these potent, ozone
destroyers is still rising because of their long atmospheric lifetimes.

Methyl bromide,
another bromine-containing halocarbon, has been used as a pesticide since the
1960s. 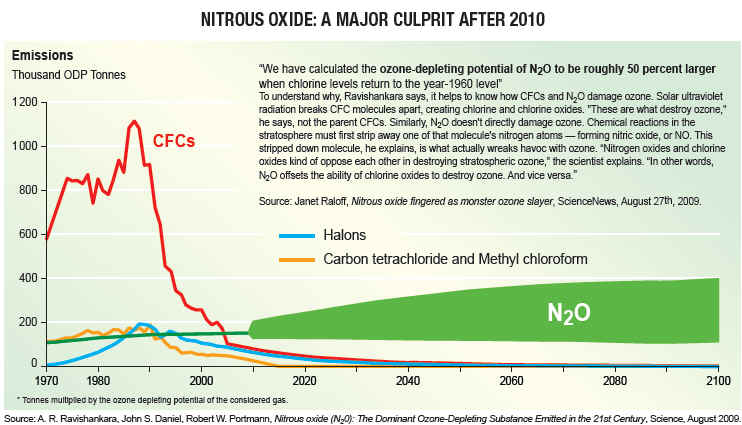 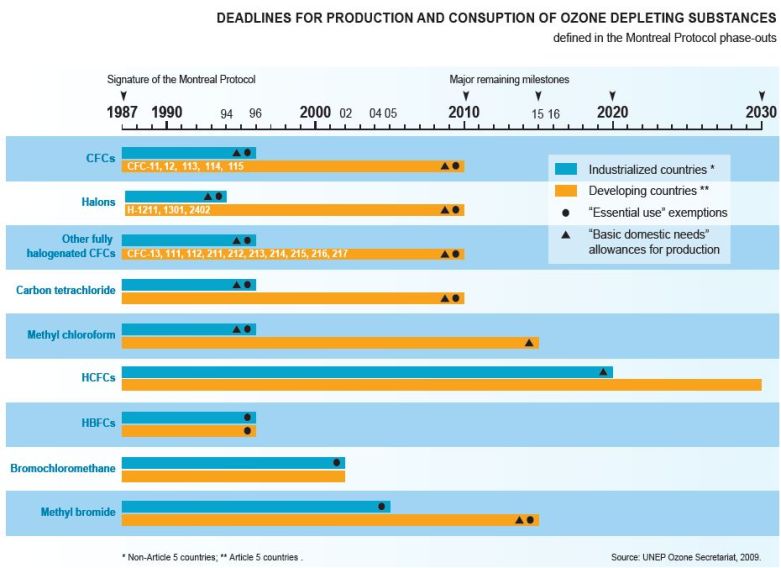 Previous Post: « Record stratospheric ozone loss in the arctic in spring of 2011
Next Post: Rocket Launches May Need Regulation to Prevent Ozone Depletion »