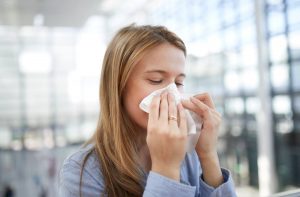 The presence of mold is a constant battle that we face, especially in highly humid seasons. These molds grow, and at a certain time, start to release spores into your air, which is harmful when inhaled. One thing that you might not know of, however, is that mold also releases other toxic substances, known as mycotoxins. You have to protect yourself from the damages that can be caused by this toxic substance by running the best air purifier for Mycotoxins.

Mycotoxins are found in the air of homes infested with black mold especially. They seriously degrade the air quality and significantly alter the health condition of people breathing in such air in the home. This article is on the best air purifier for mycotoxins removal to regain your safe air space.

The best air purifier for musty smell produced by mold spores and mycotoxins is the Winix 5500-2. It has an excellent filtration system that traps particles 0.3 microns size and an activated carbon filter to help with the poor smell. A plasma wave ion technology then further breaks down these toxins at a microscopic level for a complete cleaning process.

This air purifier makes use of a 3 stage filtration system, with high quality filters that make it the best air purifier for mold. With a true hepa filter, it traps 99.97% of contaminants as small as 0.3 microns from your air. It also has a washable activated carbon filter for removing odors in the air. In all, this unit has you covered for both particles and odor-causing contaminations.

A coarse washable pre-filter stands at the air entrance to remove large size particles before the air gets into the inner stages of filtration.

The Plasmawave Ion technology helps this air purifier break down mold contaminations at a molecular level. It is, therefore, more effective. This technology works by releasing negative ions into the air, which bonds with positive contaminants, making them too heavy to stay afloat.

Note that this technology release a bit of ion whose range is under the EPA recommended level of safety.

This unit is designed for room sizes up to 360sqft, making it suitable for medium to large sized rooms. When run in its recommended area, it cleans the air at least once per hour. It also has a good CADR number.

In the smart mode, this air purifier varies its speed automatically to meet the cleaning requirements of the air. Therefore, as the air gets dirtier, the air purifier becomes faster, and the clean ear sees it run slower. If the air remains clean for up to 30 minutes, the air purifier stops running completely.

A filter life indicator is also built with this product to help you keep track of the filter life and inform you when the time comes to replace it.

This is another air purifier with a very good filtration system that keeps your air free from mold, allergens, and other contaminants. Its filtration system consists of an H13 true hepa filter, and an activated carbon filter. These two filters combine to give a cleaning efficiency of 99.985% and can trap particles as small as 0.3 microns from the air.

This air purifier is designed to work in medium to large rooms. Taking numbers into account, it can cycle the air in a 300sqft room. With a clean air delivery rate of 170CFM, the unit cleans the air at least once in an hour, which is very impressive.

Note that this unit also produces a safe amount of ozone when you run the ionizer or UV-C light.

It is also very quiet while operating, therefore making it suitable for bedroom use.

The Coway AP-1216L unit adds a little bit of fancy to its good performance. This fancy is seen in its digital touch controls that make it very easy to use. It has a digital display, with no physical buttons to press, but rather all soft touch.

The air purifier also comes with an ionizer for combating pollution at a molecular level. When turned on, it helps remove microorganism contaminants in the air, keeping you safe and your air clean.

Designed for 330sqft rooms, it is suitable for medium to large rooms. When running in the recommended space, it cleans the air at least twice in an hour. This is possible because of its good clean air delivery average of 236, and it is effective against allergens, mold, pet dander, and other domestic contaminations.

With a 4 stage filtration, you can be rest assured that not much is going to get through this air purifier. It contains a permanent and washable pre filter that you never have to replace after a while, a deodorization filter, and a true hepa filter. The deodorization filter helps remove gaseous pollutants in the air, while the true hepa filter upholds a standard of capturing 99.9% of 0.3 microns in the air. The last stage of filtration is the earlier mentioned ionizer.

This 4 stage filtration has you covered across all different types of air pollutions in the home, including molds and mycotoxins.

The 3 stage filtration of this unit is effective against domestic air pollutions. It includes a pre filter, particle filter, and carbon filter. The Blueair 411+’s pre filter is washable and comes in 6 different colors for you to choose from. This makes the unit decorative, as well as its basic quality of being an air purifier.

Although the particle filter is not a true hepa filter, according to the manufacturer, it is just as effective. It is a specially designed filter by Blueair and traps particles as small as 0.3 microns from the air. Lastly, a carbon filter removes odor molecules from the air to complete its all-round filtration.

Despite the claim of the manufacturer is, the particle filter is not a true hepa filter, and therefore, we do not think it would be as effective as an air purifier that contains one.

The capacity of this unit is disappointing, as it is only suitable for small rooms up to 185sqft in size. Running it in a larger room would render the unit ineffective. Despite its poor capacity, however, it does a good job of cleaning the air in its 185sqft room and can clean the air up to 5 times in an hour.

The Blueair Blue Pure 411+ is energy star rated, therefore consumes a low amount of energy. For more effective operation, it is also designed with a 360 degrees air intake. This design allows you to place it anywhere and facing any direction.

This is a very affordable air purifier that is designed to remove contaminants in small sized rooms. It has a 3 stage filtration system, which impressively contains an H13 true hepa filter. A pre filter supports this hepa filter. In numbers, the Levoit air purifier traps 99.97% of pollutants in the air, which are as small as 0.3 microns. It is effective against a wide array of contaminants, including mold, dander, and allergens. However, this air purifier lacks an activated carbon filter, making it not very effective against odor pollutions.

It makes use of a pretty decent sized fan, therefore is very quiet while operating. This makes it suitable to be used in bedrooms and other quiet places in the home. It also has a timer that helps you control how long this unit would run. You can vary its settings to run for up to 12 hours at a stretch.

A handy feature that accompanies this unit is the safety lock. The inquisitive fingers of pets and kids never seem to stay off of anything in the home, especially something as fascinating as a box that blows air. With this pet lock, you can easily deactivate the controls of the unit, therefore causing it not to respond to touches.

Features to consider in choosing the Best air purifier for Mycotoxins

The capacity of the unit you purchase depends on your room size. Smaller capacity air purifiers would not perform well in large capacity rooms. It is better to err on the side of caution by purchasing a slightly higher capacity unit than you need instead of a smaller one.

the automatic mode makes using an air purifier much easier. Devices with this mode can run by themselves, without requiring your constant input. They manage pollution in the air by varying their fan speeds accordingly. This feature is desirable for convenience but not really necessary.

the filters in air purifiers requires constant change because they get dirty. Since you are dealing with mycotoxins, the dirty filters are intolerable. Purchasing units with expensive filters would see you topple the total amount spend on the air purifier itself within a short time.

Ionizer or UV-C light: ionizer and UV-C light attack microscopic pollutants that might get through the physical filters. Ionizers release negative ions that bond with such contaminants, making them too heavy for the air. UV-C lights, on the other hand, expose the air to ultraviolet rays that kill microorganisms. However, always check if the air purifier generates an unhealthy level of ozone, and stay away from the ones that do.

Mycotoxins are substances that are created by molds and released into the air. They are toxic, therefore inhaling them could cause health problems. Mycotoxins are created by microfungi found in different species of mold. They are neurotoxic, and their different molecular structure determines the effect they have on the body of humans, which varies in severity and symptoms.

What does Mycotoxins do to your health?

Mycotoxins cause a lot of damage after prolonged exposure to the body. It might not have any telling effect on the short term, depending on the individual. When exposed to mycotoxins, the symptoms exhibited by individuals varies, as well as the overall severity. Some of these symptoms include:

How do air purifiers get rid of mycotoxins?

Very few air purifiers today can remove mycotoxins because of their small nature. If you can purchase a medical-grade air purifier, then you stand a better but not guaranteed chance of trapping mycotoxins. However, conventional air purifiers can help clean your air by removing the reproductive seeds called mold spores, therefore eliminating mycotoxins with time. Note that mycotoxins are very small in size, and therefore there is no guarantee that an air purifier would trap them.

What type of air purifier is best for removing mycotoxins?

At least, you should purchase a product with a true hepa, and activated carbon filter. The carbon filter helps with the musty smells that accompany mold infestation, while a true hepa filter captures the reproductive spore seeds. This way, mold is gradually eliminated from your home, as well as the mycotoxins they release into the air.

Winix 5500-2 stands out as the best air purifier for mycotoxins. Firstly, it has a good clean air delivery rate that affords it enough power to cycle the air in a 360sqft. Its 3 stage filtration is backed by a plasma wave technology that gives contaminations no chance of escape back into the air. For maximum comfort, you can also run this unit on automatic mode.

InvisiClean Aura II Air Purifier is another good unit to purchase. With a 3 stage filtration, it has a very similar quality to the Winix 5500-2 but lacks the automatic mode. It, however, contains both an ionizer and UV-C light for effectively cleaning your air and can serve up to 300sqft.

Previous Post: « The Best Air Purifier for 1200 Sq Ft – Consumer Reports
Next Post: What to Set your Dehumidifier at in a Basement »