Ozone is an unstable molecule and reactive gas. It comprises of three atoms of oxygen (O). Ozone exists in the Earth’s atmosphere. The ozone affects life on Earth in both good and bad ways. Most of it inhabits the stratosphere. This is a layer of atmosphere located between 10 and 40 kilometers above us. 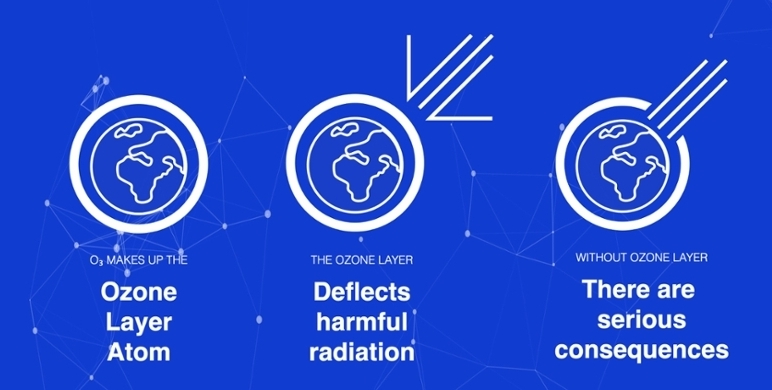 The ozone layer weakening makes us more prone to cataracts, impaired immune systems, and skin cancer. In animals, fertility and the viability of their offspring are also affected by Ultraviolet rays.

Plants are also affected. The UV radiation impairs their ability to grow and develop correctly.

The ozone also resides in the Earth’s troposphere. This is an atmospheric layer located 10 kilometers above us.

Tropospheric or ground-level ozone is what we breathe. It is made from photochemical reactions between nitrogen oxides and volatile organic compounds. Here, ozone is a harmful contaminant that damages plants as well as lung tissue.

Chemical plants, oil-based paints, and gasoline pumps are among the most notable sources of volatile organic compounds. High-temperature combustion results in the formation of nitrogen oxides. Other viable sources include boilers, power plants, motor vehicles, and industrial furnaces.

The ozone hole first appeared over Antarctica. This is mainly because chemical and atmospheric conditions unique to this region increases the effectiveness of ozone destruction by reactive halogen gases.

Against Arctic values, we deduce systematically that the lower values for total Antarctic ozone occur in the early spring. This is mainly because the polar vortex is more robust, and therefore, much more effective in reducing the transport of ozone-rich air from mid-latitudes to the pole.

The ozone hole was first discovered in 1985. Scientists; Joe Farman, Brian Gardiner, and Jonathan Shanklin recorded a substantial decrease in the stratospheric ozone levels over the Antarctic stations of Halley and Faraday.

Their data showed the ozone levels dropping since the late 1970s. The measurements were made with ground-based Dobson spectrophotometers. By 1984, the ozone layer over the stations mentioned above was only two-thirds as thick as seen in the earlier decades. This phenomenon came to be known as the Antarctic ozone hole.

In the late 1780s, a Dutch scientist conducted an experiment where he passed electric sparks through oxygen. His findings stated an unusual smell. He noted that the gas resulting from the experiment reacted when mercury is introduced. It had been known for ages that the strange odor was a remnant of a lightning strike.

Other scientists agreed with Van Marum’s findings and credited the odor to electricity. They referred to it as the “electrical “odor. However, in 1840, another scientist named Schönbein, discovered that the odor was not a by-product of electricity.

Instead, his findings stated that it occurred due to the properties of a substance produced during the electrical process. Subsequently, he named the substance ozone. The word ozone is derived from ‘ozein,’ a Greek word for “to smell.”

In the 1920s, a physicist and meteorologist by the name, G. M. B. Dobson, invented a new spectrometer. This spectrometer was first used to measure the total amount of ozone in the atmosphere. Dobson’s findings noted that there were day-to-day fluctuations in the amount of ozone over his test location in Oxford.

He also noted that there was a regular seasonal variation in the atmosphere. He hypothesized that the variations in atmospheric pressure led to disparities in ozone. To test this theory and support his findings, more spectrometers were constructed and distributed throughout Europe.

The measurements recorded showcased uniform variations in the ozone with the passage of different weather systems. Some of these spectrometers were installed in the town of Arosa, located in the Swiss Alps. Measurements have continuously been made at that station since 1926, making the record almost 73 years long.

As previously mentioned, UV radiation is a threat to all life on earth. Not only has the ozone hole affected animals and plants, but it has also led to considerable changes in Southern Hemisphere weather patterns.

These weather patterns have affected natural ecosystems and food production. Climate changes are likely to have a similar and probably more significant impact than UV radiation.

The ozone hole alters wind, rain, and snowfall patterns all around the southern hemisphere by affecting atmospheric circulation. The changing pattern and strength of winds have caused shifts in the regions.

These changes in weather patterns could have adverse effects on natural and agricultural ecosystems all across the southern hemisphere. Humans and all other living organisms cannot survive without water, making it vital for all living things.

The only logical way forward would be to protect our ecosystems. However, on a positive note, the ozone hole has been linked to better growth of trees and crops in areas where there is rain increment, such as in the New Zealand Alps.

The multifariousness of lakes in East Antarctica seems to be affected as well, with more lakes becoming saltier, due to less freshwater entering the lakes. Stronger winds have also affected how the oceans mix. This, in turn, affects ocean productivity and most southern oceans’ ability to absorb carbon dioxide.

During the summer, the effect of the ozone hole on weather patterns is visible. The ozone hole may also be responsible for more acute events, including drought, wildfires, and floods all over the Southern Hemisphere.

Being that these extreme weather events affect water supply, there may be many unrecorded side effects of ozone depletion on agriculture and ecosystems. This also includes ecosystem services.

Exposure to UVB radiation has been linked to reduced vitality in micro-organisms. This results in reduced survival rates for these organisms.

Scientists have cited a direct reduction in the production of these micro-organisms due to ozone depletion-related increases.

Early developmental stages of amphibians and other marine animals are said to have been affected and damaged by UVB radiation.

Some of the grave effects include impeded larval development and decreased reproductive range. Growth in UVB exposure could have a negative repercussion on the population of small marine organisms. This may, in turn, affect the whole marine food chain.

Global warming refers to the increase in surface temperature caused primarily by the accumulation of greenhouses gases produced by man. These gases are mainly methane and carbon dioxide, coupled with nitrous oxide.

These compounds have been released into the atmosphere since the 1930s. They were used in the manufacture of refrigerants, air conditioning as well as solvents. They are responsible for the heat trapped in the lower levels of the atmosphere.

The greenhouse effect is the natural way in which the Earth’s surface is warmed. Most of the sun’s energy is absorbed and emitted through greenhouse gases, while the rest is reflected in space.

The Earth’s atmosphere is warmed by the sun to about 33 degrees Celsius. This temperature makes it conducive for the planet to sustain life.

The Montreal Protocol was an agreement that was signed by 197 countries. The protocol entailed all UN member States. The deal was adopted on 15th September 1987. It was put in effect on 1st January 1989.

During the signing of the protocol, all UN member countries solidified their aim to cease producing the substances responsible for the depletion of the ozone layer. These substances include chlorofluorocarbons, carbon tetrachloride, and halons.

The protocol forbade the production and consumption of human-made chemicals, commonly referred to as ozone-depleting substances. When these chemicals are released into the atmosphere, they damage the ozone layer in the stratosphere which leads to global warming.

This is the layer that protects humans and the environment from the adverse effects of ultraviolet radiation. Both UVA and UVB have unfavorable effects on the inhabitants of planet Earth.

Decades later, after the protocol’s ratification, the ozone hole shows its first signs of recovery. Two scientists published this finding in 2018, which indicated the falling of atmospheric chlorine levels. The ozone had started to heal from the adverse injuries inflicted by harmful chemicals.

This is proof that the integration of countries to phase out ozone-depleting emissions is on the right path. However, it is essential to note that it may take a few more decades before we safely assume that the worst is behind us.

Other scientists claim that we may not see any improvement in the ozone layer till the late 2040s.

They also suggested that by 2060, the ozone layer will have reverted to almost its original state. This will be a remarkable result compared to when it was discovered in 1984.