No land-based vertebrate animals inhabit Antarctica. Invertebrates which
can tolerate the lower temperatures, exist in the Antarctic Peninsula but
are still considered rare. They range from protozoa (single-celled
creatures), rotifers, tardigrades and nematodes to arthropods (mainly
mites and springtails). The largest invertebrate is the wingless midge
(Belgica antarctica), which grows to 12 mm long. Only 67 species of
insects have been recorded, and most are less than 2 mm long. Most of them
are parasites, like lice which live in the feathers and fur of birds and
seals, where they are protected from the harsh climate for much of the
time. Collemola (springtails) are the only free-living insects. They feed
on algae and fungi, and remain dormant in winter.

Despite the severe climate, many plants thrive in the Antarctic. There are
more than 200 species of lichen and over 50 species of bryophytes, such as
mosses. A wide of variety of fungi are also survive the harsh Antarctic
conditions. Over 700 species of algae are found in the Antarctic, the
majority of which are single-celled plants called phytoplankton.
Phytoplankton, protozoa (single celled animals) and bacteria are all
important food sources within the Antarctic marine environment. In
addition, these microscopic organisms play a crucial role in removing
carbon dioxide from the atmosphere.

The surrounding ocean, however, abounds in living creatures. Large numbers
of whales feed on the rich marine life, especially krill. Six species of
seals (including the crabeater, elephant, and leopard) and about 12
species of birds live and breed in the Antarctic. The most prominent
inhabitant of the Antarctic is the penguin. A flightless bird, it lives on
the pack ice and in the oceans around Antarctica and breeds on the land or
ice surfaces along the coast. Most typical are the Adélie and Emperor
penguins.

Derived from the Greek words phyto (plant) and plankton (made to wander or
drift), phytoplankton are microscopic organisms that live in watery
environments, both salty and fresh. Some phytoplankton are bacteria, some
are protists, and most are single-celled plants. Among the common kinds
are cyanobacteria, silica-encased diatoms, dinoflagellates, green algae,
and chalk-coated coccolithophores.

Like land plants,
phytoplankton have chlorophyll to capture sunlight, and they use
photosynthesis to turn it into chemical energy. They consume carbon
dioxide, and release oxygen. All phytoplankton photosynthesize, but some
get additional energy by consuming other organisms. 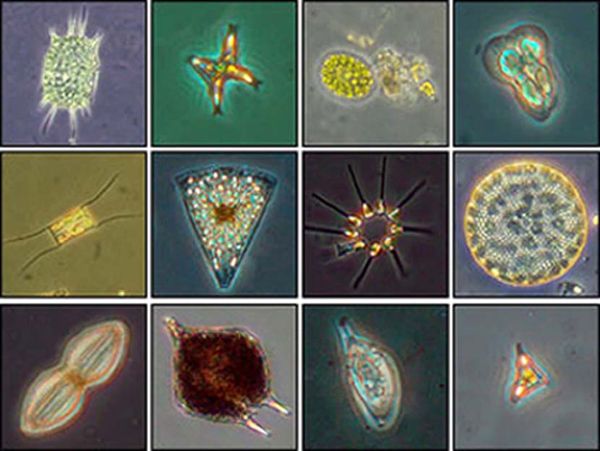 The food chain is based on phytoplankton, a varied group of tiny free
floating plants. In spring and early summer their numbers increase
rapidly, producing “blooms” like a think pea soup which can cover thousand
of square kilometers of the ocean. These blooms provide a food source
which is 300-400 times more concentrated than normal for a variety of
zooplankton (tiny animals, especially copepods and krill, which in turn
provide food for fish, seals, whales and penguins. 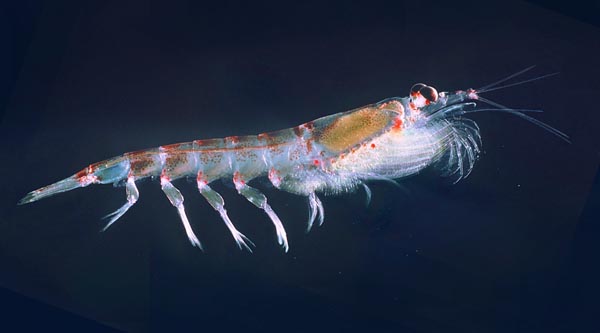 Krill, a Norwegian whaling term meaning “small fry”, Krill are one of the most
important elements in the Antarctic food chain. They feed on microscopic plants
(phytoplankton) that float around the Southern Ocean. The krill, in turn, then
become the basic food for baleen whales, seals, penguins and many seabirds. 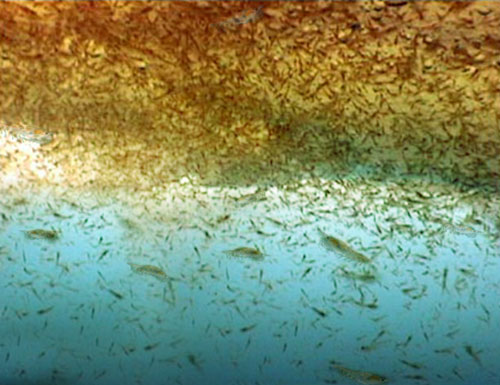 This means that Antarctic krill emit a yellow-green light that is thought to
either camouflage the krill’s shadow or aid the krill in mating or schooling at
night. Krill are invertebrates that grow to about two inches in length and live
in large schools, or swarms, as dense as 10,000 krill per cubic meter of water. 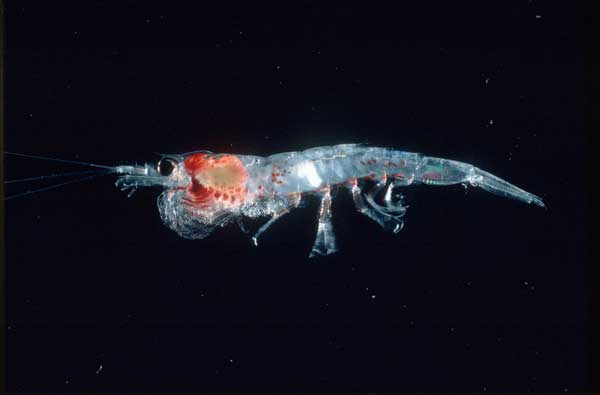 They live in the surface waters of the Southern Ocean, which extends north from
the Antarctic continent to the polar front — an area where the cold water of
the Antarctic submerges beneath the warmer waters of the Atlantic, Indian, and
Pacific Oceans. As this deep, cold water rises to the surface of the Southern
Ocean, it brings nutrients from all the world’s oceans into the sunlight, making
this area home to what is possibly the earth’s largest assemblage of
phytoplankton. It is this massive gathering of phytoplankton that allows for
such tremendous swarms of krill, which harvest the miniscule phytoplankton
particles with a specially developed feeding basket that filters them out of the
water. The krill also find nourishment by scraping ice algae off the underside
of pack ice, particularly in spring. These are successful techniques,
apparently, since the total biomass, or weight, of Antarctic krill — which is
estimated to be between 100 and 800 million tons — may be the largest of any
multi-cellular animal on the planet. 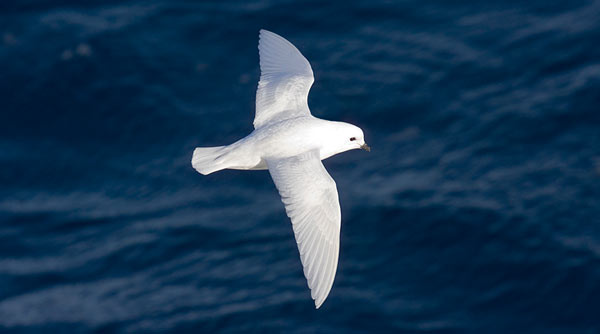 Each spring, over 100 million birds breed around the rocky Antarctic coastline
and offshore islands. Around 35 species visit the subantarctic Islands. They
range from the magnificent wandering albatross, which flies thousands of
kilometres to feed, to gulls, skuas, cormorants and terns, which hunt closer
inshore. The wandering albatross has the longest – up to 3.5 meters – wingspan
of any bird. The name of this magnificent creature is truly deserved as
wandering albatross can travel up to 10,000km of a single feeding trip. 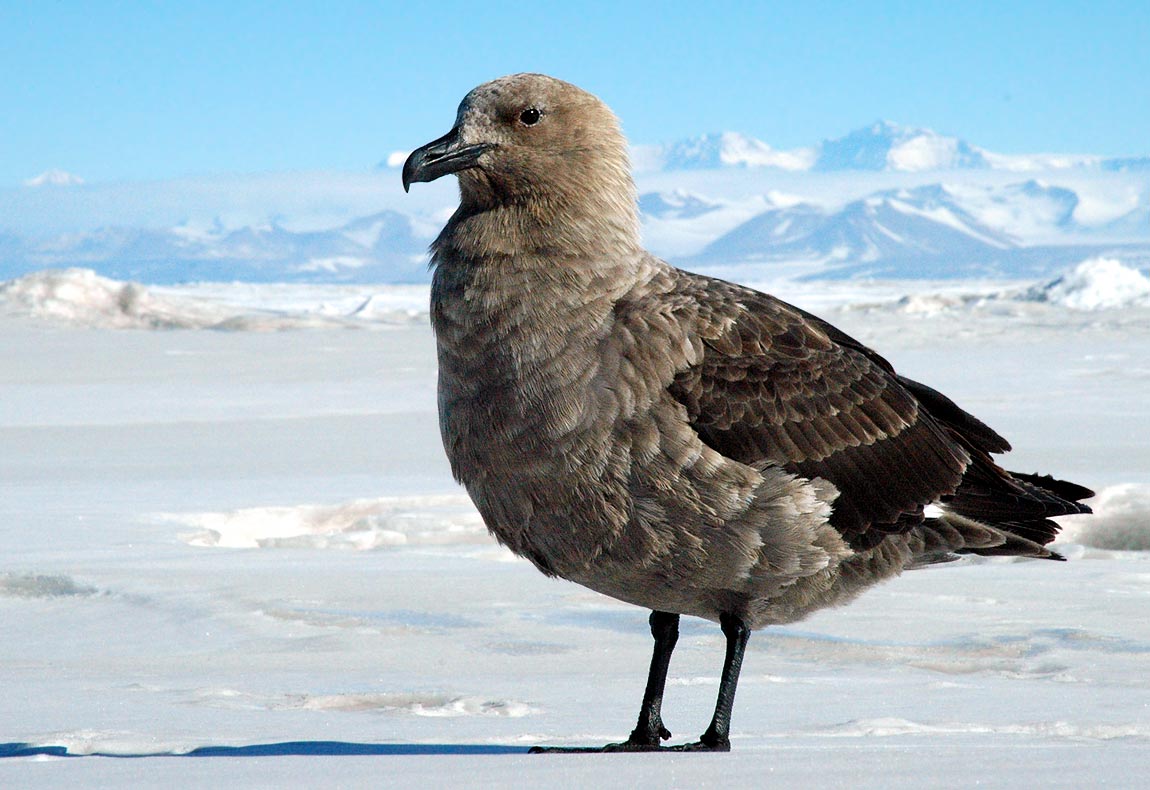 In the Antarctic, there are more species of petrels than of any other bird
family. Petrels are birds which are characterized by their tube-like nostrils on
the upper beak. 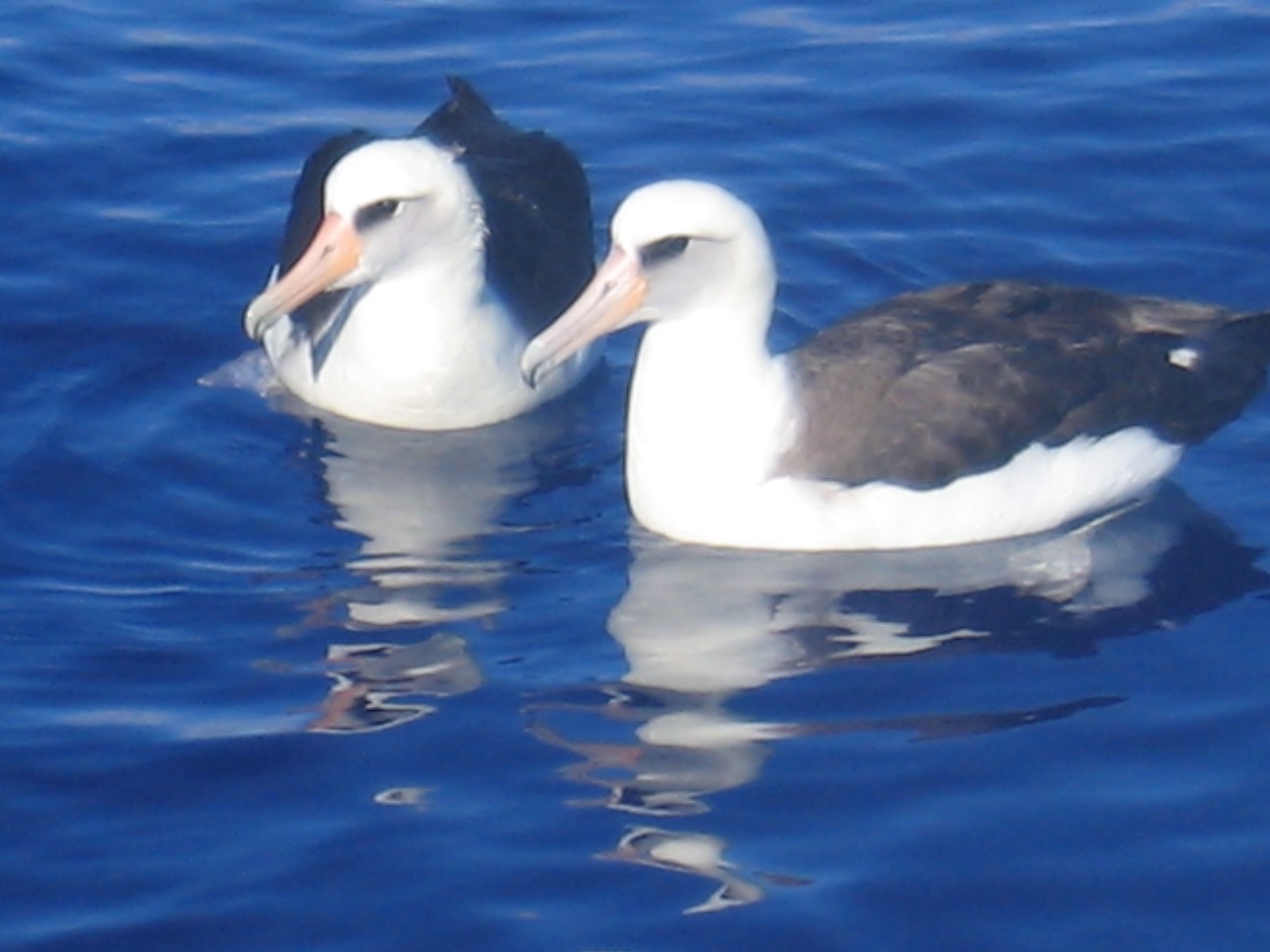 
Most return to the same sites each year. Some, like the albatross, mate for
life. In addition five species of land birds live all year round on South
Georgia, Kerguelen and Marion Islands. 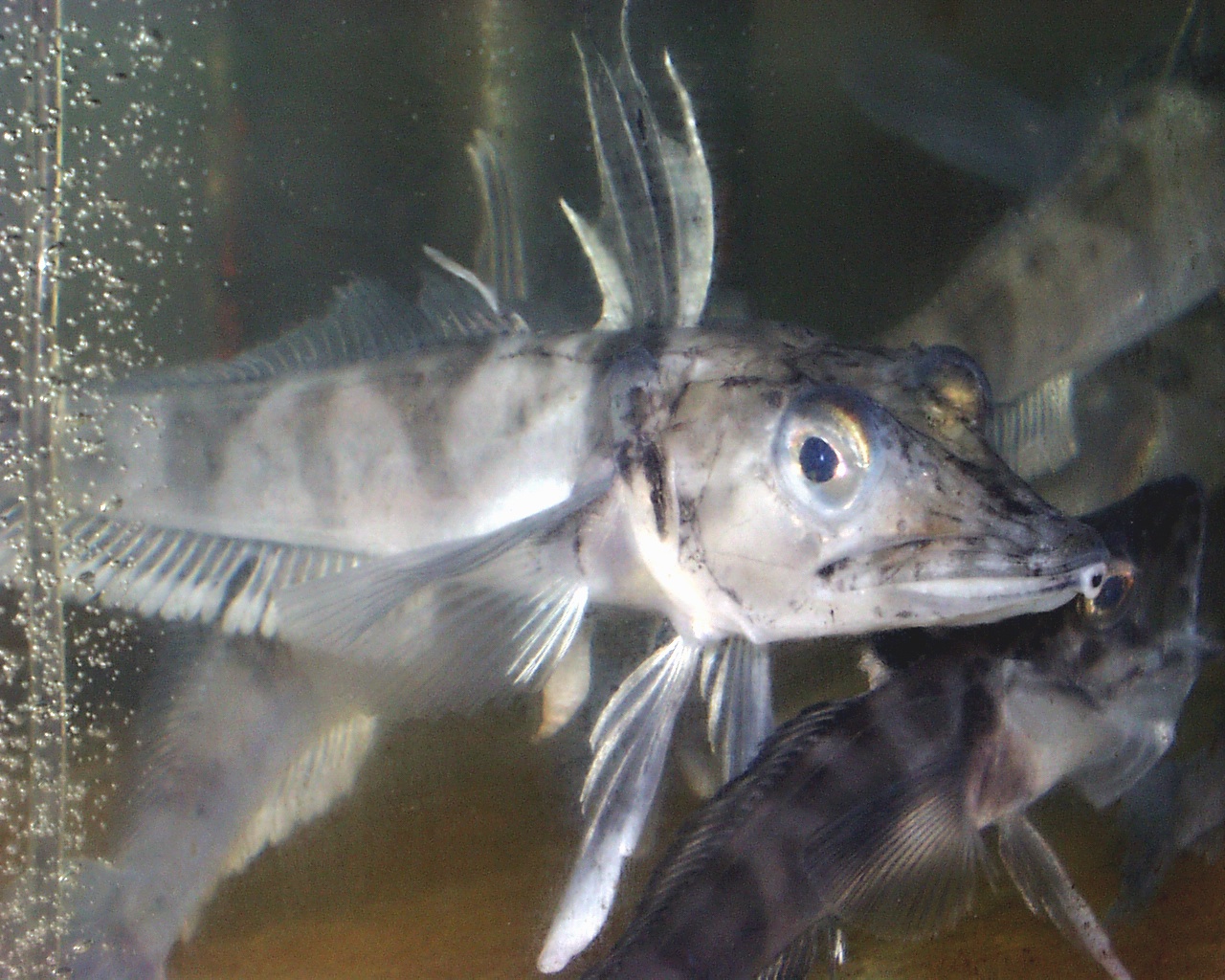 There are about 200 different kinds of fish which live in Antarctic waters,90
per cent of the total number of individual fish belong to the well studied
group, the Notothenioidea. 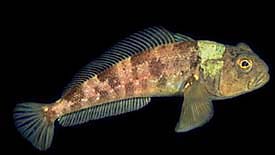 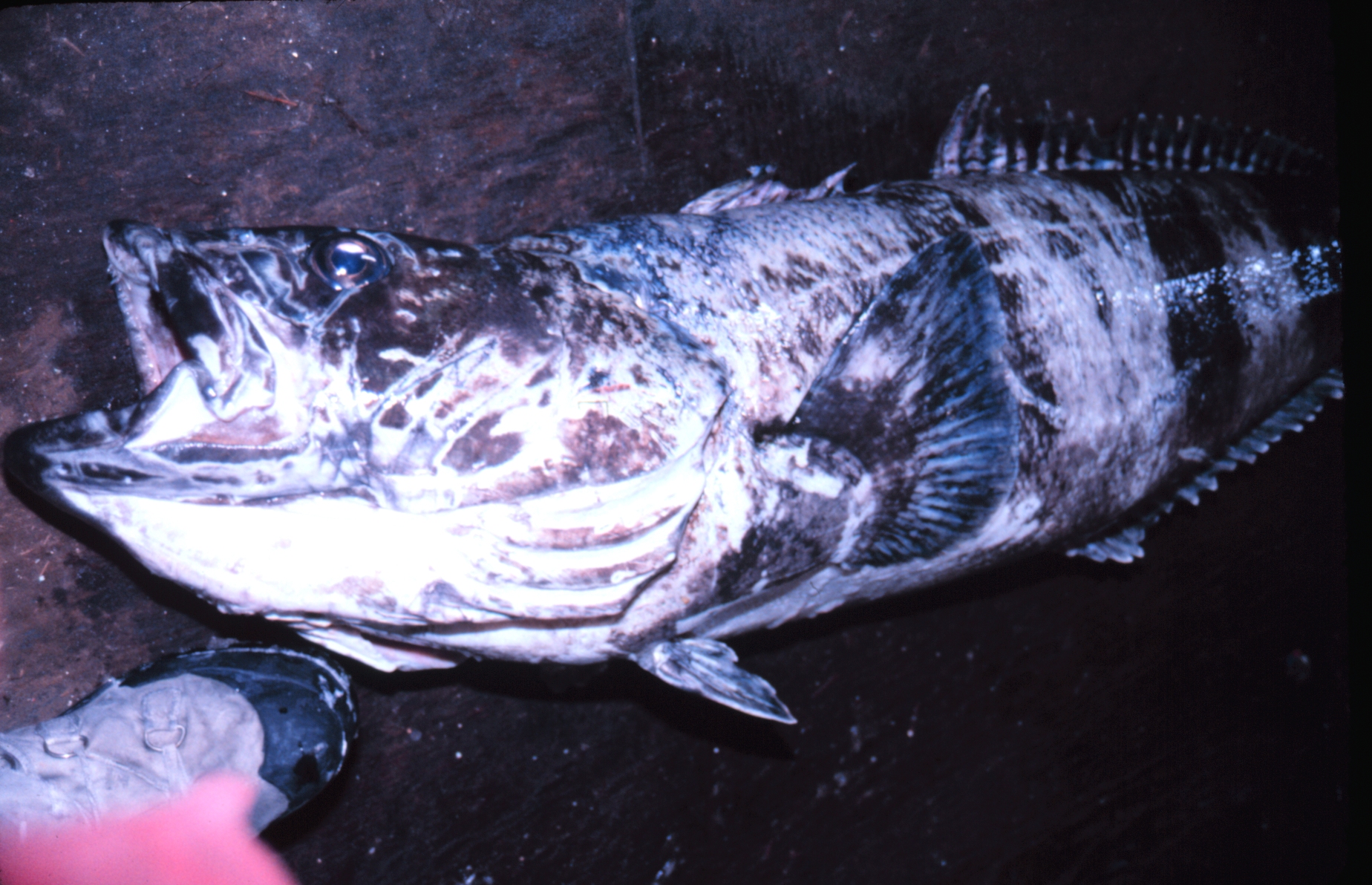 Other bottom-dwelling fish include eel-pouts, sea snails, rat-tailed fish,
hagfish, barracuda, lantern fish and skates are also found in these cold waters.
Some species of Antarctic Cod can produce a compound similar to ‘anti freeze’ in
their blood which stops their body fluids from freezing, even when temperatures
drop below freezing. It lowers their freezing point to about -2°C. 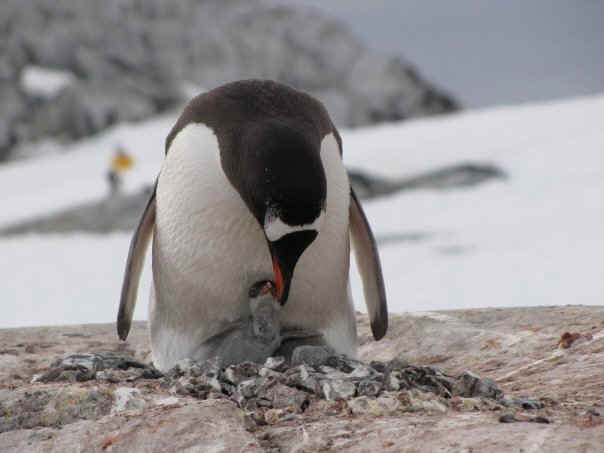 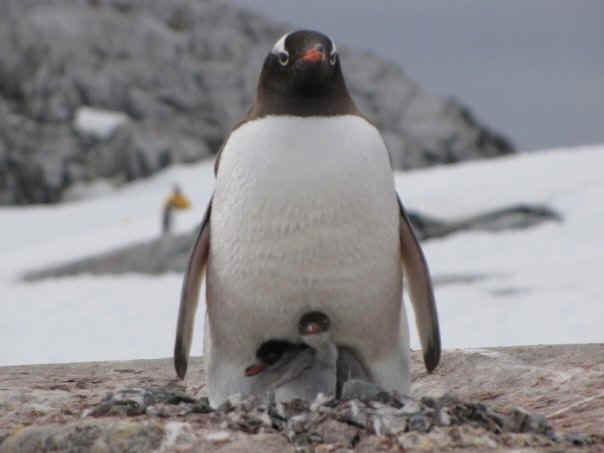 Penguins are flightless birds found in the Southern Hemisphere from the
Antarctic to the equator. There are 18 species of penguins in the southern
water, seven of them live around Antarctica. 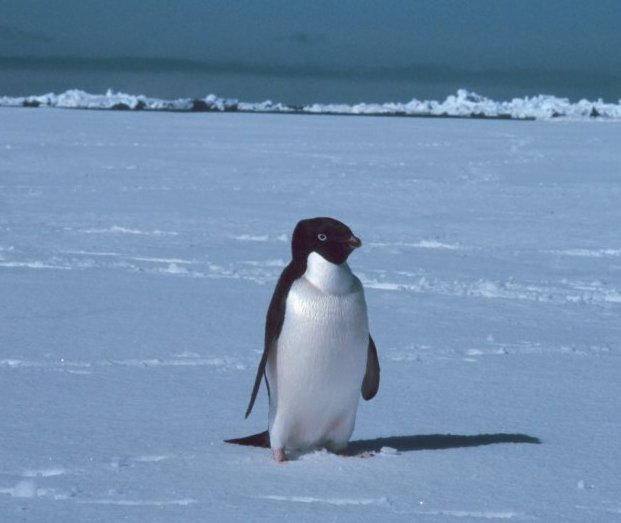 The Adelie and emperor breed on the Antarctic shores and are the only two
species found in the Ross Sea area. 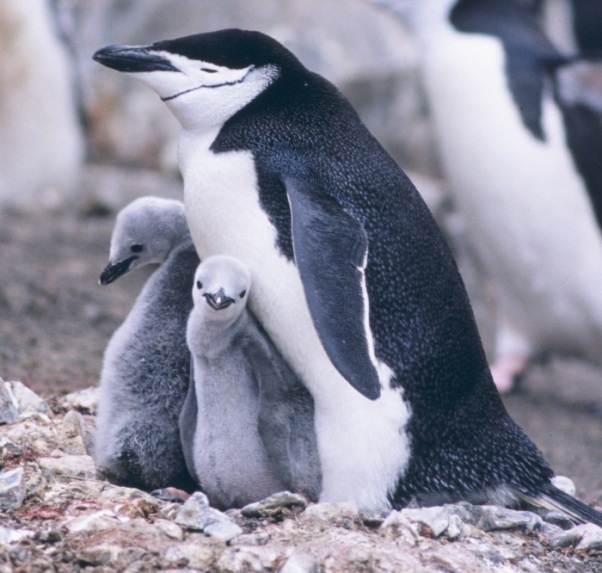 Chinstraps breed on islands around Antarctica and gentoos are found from
the Antarctic islands to the sub-Antarctic. 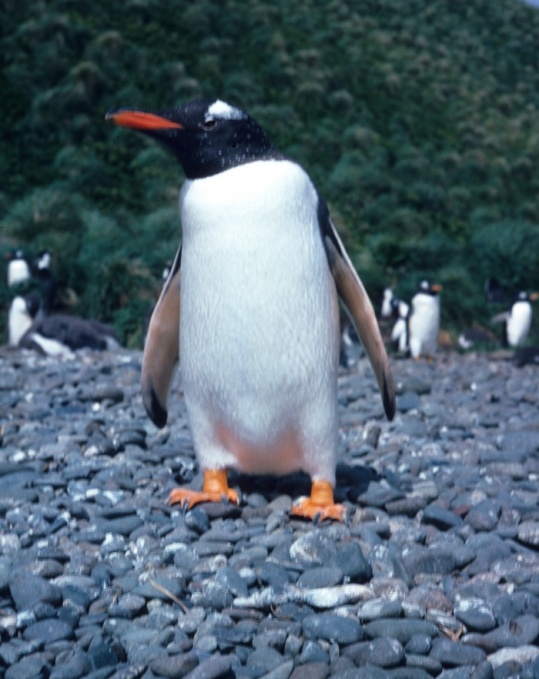 Another three species (the King, rockhopper and macaroni) live on the
sub-Antarctic islands. 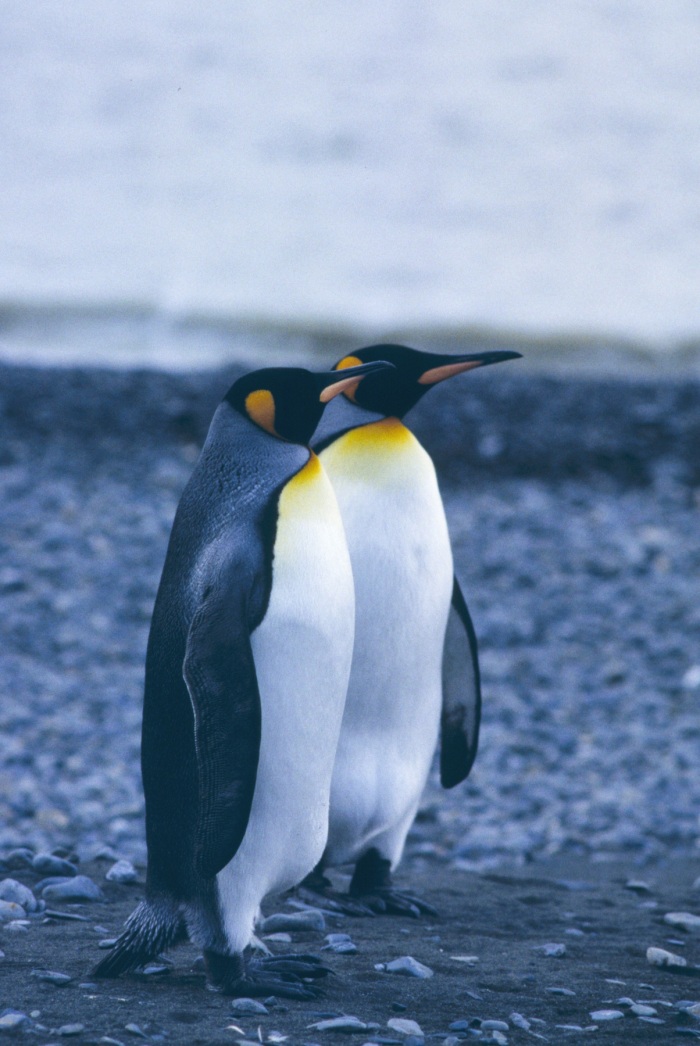 Because ice covers almost all of Antarctica, penguins have to get all
their food from the sea, where they spend about half their time. They are
able to dive very deeply (emperors can dive to 250 meters) and all are
excellent swimmers. The feet and tail act as a rudder and the flippers as
propellers. They feed mostly on small fish and krill, each one captured
individually. The penguins are also food for other ocean predators:
leopard seals and killer whales. On land their main predator is the skua,
a bird which takes both eggs and chicks. 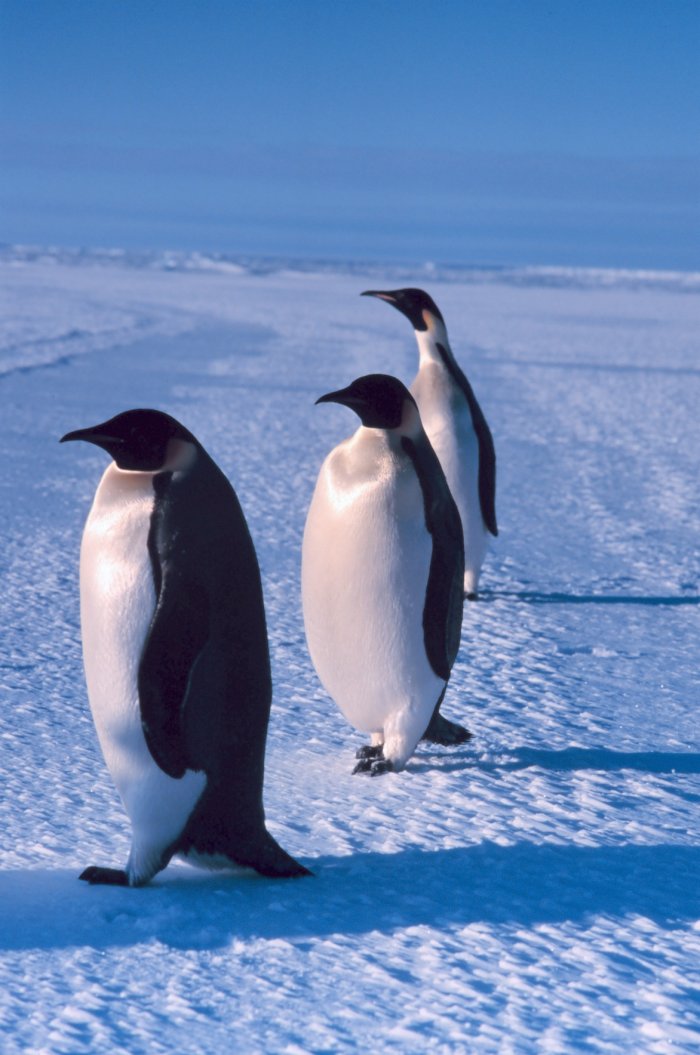 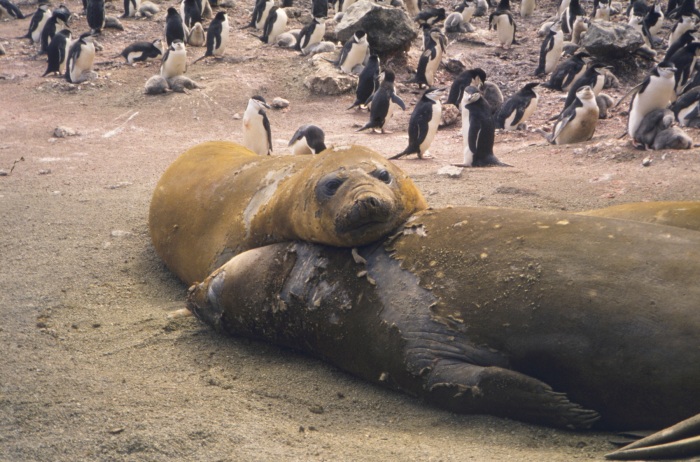 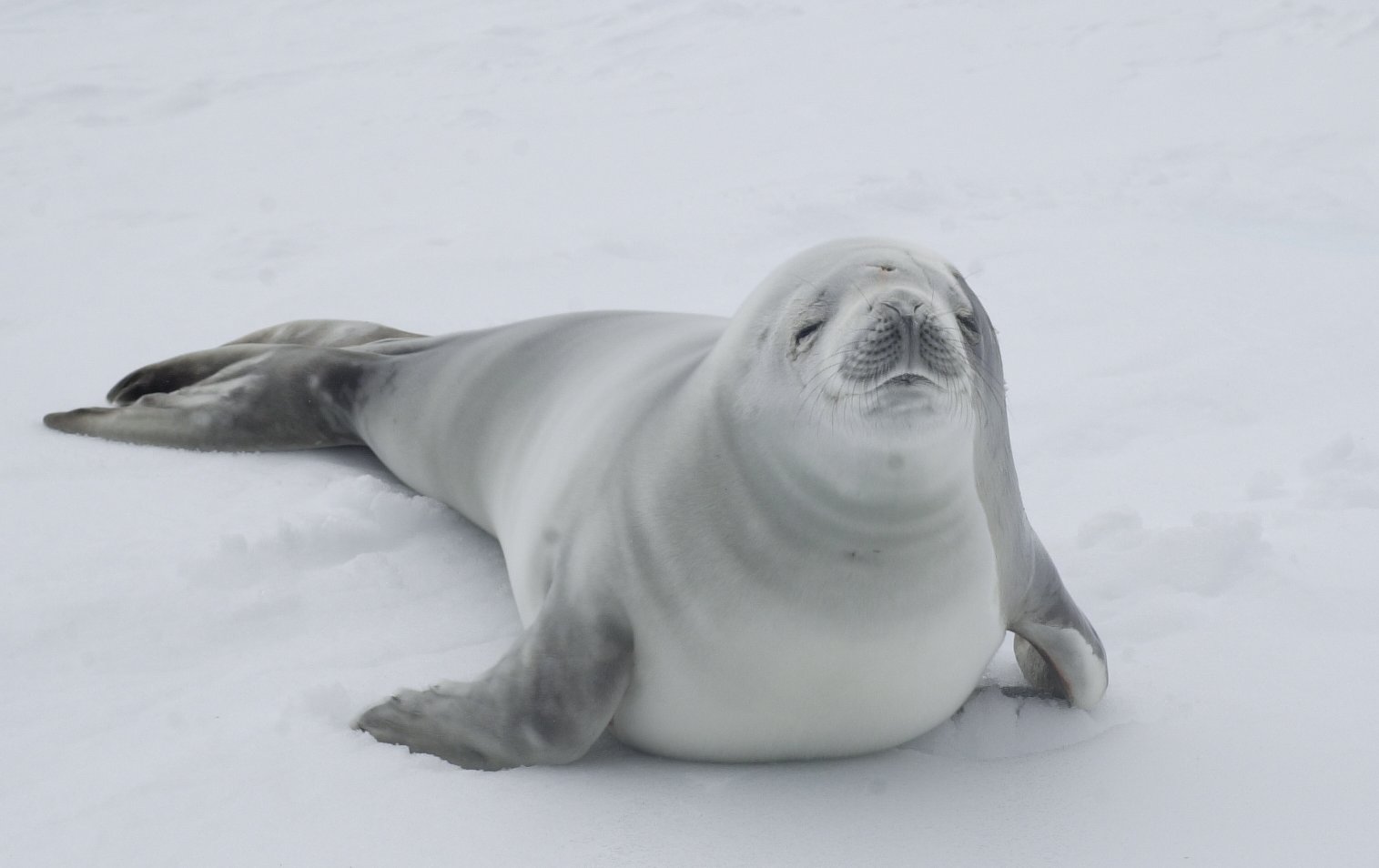 The Southern Elephant Seal is the largest of all the pinnepeds and one of
the largest mammals other than whales. Fully grown males may reach a
length of 4.5 meters and weigh about 4,000 kilograms. They are of course
well adapted to the cold climate, with their big round bodies, layers of
blubber and small extremities. 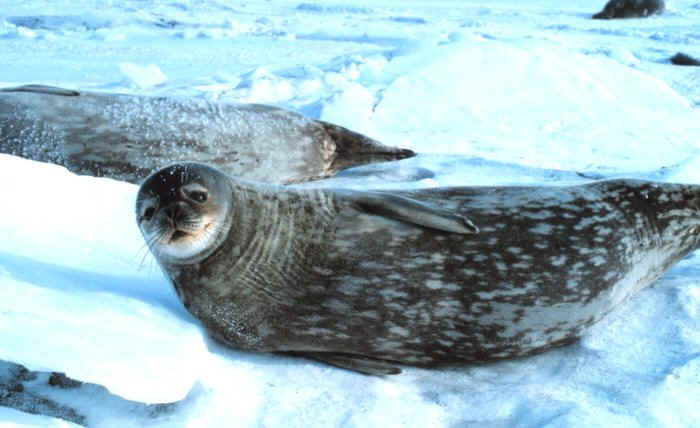 Seals catch most of their prey under water, but spend some time on land or
ice floes giving birth, raising their young and basking in the sun. 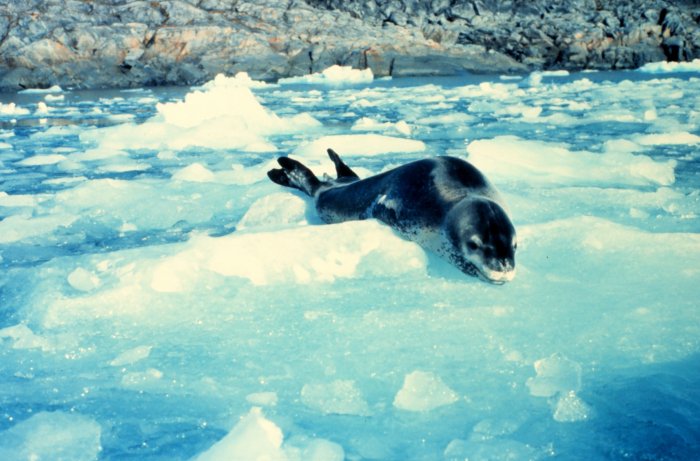 On land they are quite ungainly but in the water they are very graceful
and are excellent swimmers. Much larger numbers of seals are found in the
Antarctic compared to the Arctic, which reflects the much greater
abundance of food resources in the Southern Ocean. 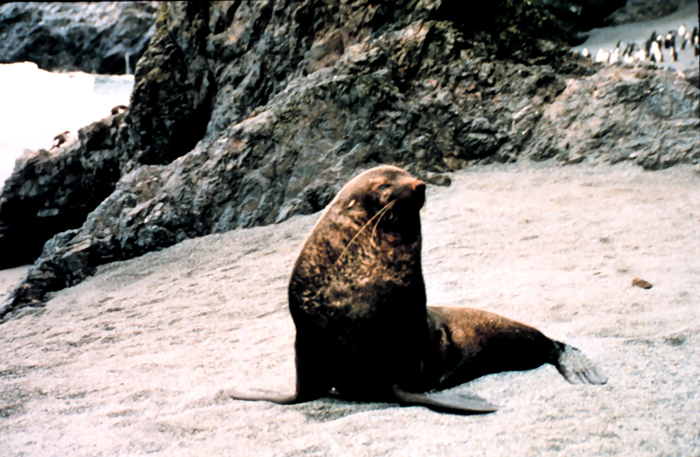 Many Southern Ocean whales are migratory, heading to tropical waters
during the Antarctic winter. They are found there in the summer, feeding
on krill and other marine resources. Fourteen species of cetaceans (the
name given to whales, dolphins and porpoises) are found in Antarctica. Of
these, twelve are whales. There are two groups, the baleen whales and the
toothed whales.

Baleen is a huge hairy-edged plate in the whale’s mouth, which acts as a
sieve. The whale sieves out krill, small fish and crustaceans.

Six species of baleen whales are found in Antarctica, including the huge
blue whale, which is the largest animal that has ever lived. It grows up
to 24 meters and can weigh 84 tons. Other baleen species are the fin,
southern right whale, sei, minke and humpback. Four species of toothed
whales are found in Antarctica. Except for the sperm whale, they are much
smaller than the baleen whales and weren’t widely hunted. The other
species are the southern bottlenose whale, the orca whale and the southern
fourtooth whale. They all have teeth and feed on fish and squid.